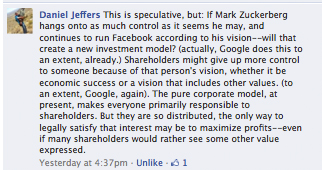 Even after all this time, Facebook still doesn’t make a ton of cash. Consider that more than 800 million people online turned a $1 billion profit. Now that Facebook will be public, will shareholders be satisfied with a hot social media-darling stock, or will they demand dividends?

At some point, Facebook needs to pay the piper, and that means the Street is going to put heat on Face to deliver real returns. If you think $1 billion is a lot of money, think again. Second tier social network LinkedIn is on pace to net $860 million this year. Arch rival Google earned $10 billion last year, and Amazon.com netted

Facebook will feel the pressure to go beyond its current offering, and open the flood gates to businesses. Expect to see a deeper corporate presence beyond social ads and applications.

Facebook’s privacy quibbles often make headlines. But the reality is we probably see a fraction of the real tension between the social network, legal entities and other organizations. With the IPO that will change: Facebook will have to reveal all of its threats to shareholders, including privacy lawsuits and investigations. As a result, expect Facebook’s privacy issues to escalate.

4) Acquire Instead of Innovating

Sometimes in life you become what you hate. And so Facebook will become like Google, relying on acquisition to innovate rather than develop new technology inside its walls.

Let’s be clear, Facebook will continue to code and develop its interface internally. But like most mature and larger companies, as time, size and public market culture impact the company, Facebook will lose its proverbial edge. That’s why acquisition fills an important role, allowing the company to stay fluid in developing technology trends. IPO funding will fuel these new acquisitions.

Let’s be honest. There’s nothing more exciting to pundits than pontificating about the future of Facebook and what it means to us as social media experts, media works, and technologists. That’s why you can expect to see at least 500 more posts from folks like me about what the Facebook IPO means.