For Love of Children’s Andrea Messina and Tim Payne, a Give to the Max Day grand award winner and case study

These contests are multichannel marketing and social media driven adventures that can be extremely exciting! Contests produce a ton of data, including hard numbers such as the number of donations, highest and lowest donation, etc. that can make the biggest stat geek and ROI analysts thrilled. They also produce fantastic survey data, case studies and media reports. The end result is an incredible jambalaya of data.

When the Case Foundation’s first America’s Giving Challenge was held in 2007, online fundraising contests were new and unique. Today, they are increasingly common, ranging from contests funded by corporations and foundations to giving days for states, cities and regions. Contests have traditionally raised issues and questions. Common complaints include donor fatigue, and taxing nonprofits’ time and resources. In the worst cases, they produce losers, nonprofits who gain nothing by participating. Some critics consider them gimmicky.

Done right, we the organizers Greater Washington’s event believed that a giving day can become a philanthropic tool, achieving goals to enhance giving and nonprofit health. So the three of us — Community Foundation for the National Capital Region, United Way of the National Capital Area and Razoo — built a giving day that would boost capacity for NPOs via training, prove some new funds and donors, and heighten awareness of locally serving nonprofits in the capital region. 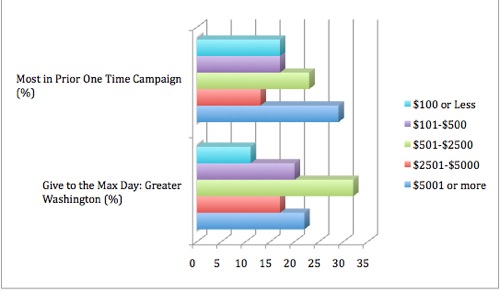 The Case Foundation agreed that it would be interesting to see if such a strategy could hold water. There were many fascinating insights that came out of the report. For example, the above chart shows how participating nonprofits performed better than or close to their prior top online fundraiser.

We did encapsulate most of the tips, insights and lessons learned in the conclusion, which also produced 16 tips for potential giving day organizers and participating nonprofits (the subject of my Case Foundation blog post). The Case Foundation report site also has five nonprofit case studies and the survey data on it.

I hope you will find all of this data very useful to you in your social good and marketing work. And please tell me what you think! In addition, you may be interested in what these outstanding bloggers had to say about the data…

2 Replies to “Give to the Max Day Research: The Ultimate Case Study”