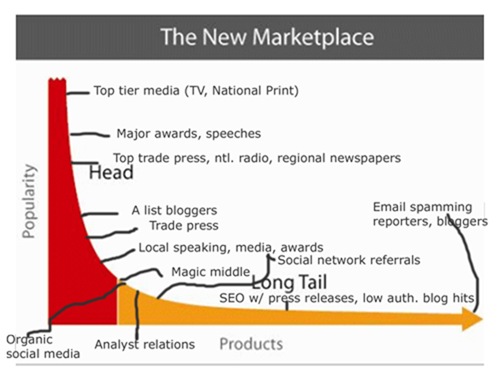 Lots of folks ask me if I think social media will replace traditional media. No one knows the future, but I doubt it. We’re likely looking at an integrated environment where both traditional and new media have value. Taking a play off of Chris Andersen’s Long Tail, this chart plots the effectiveness or the weight of various earned media tactics in the current environment.

Red hits have the most impact, while the long tail (yellow) still makes up half the marketplace. We’ll define the marketplace as word of mouth power.

Needless to say, this is subjective and various earned media forms have disparate degrees of weight. General classification is the best we can do without the correct measurement tools using a real world full on case-study with all types of earned media opportunities. Further, this assumes PR owns social media within a company. As we know, social media is often divided amongst the larger marketing department.

Another issue with this chart is that it seeks to isolate individual tools and their weight. In reality — given today’s fractured media environment — one hit in any of these areas can trigger successive hits in others. When a word of mouth campaign has actual substance it usually cascades. Smart PR and social media practitioners understand this.

For example, my client FortiusOne received significant blog hits in the magic middle last fall (both Solis and Huyse introduced me to this theory). When pointed to this significant traction, the Washington Post took notice and wrote them up. Then ABC, Information Week and a new host of bloggers saw the Washington Post story and covered FortiusOne. And then speaking engagements and secondary trade press coverage ensued.

In Chapter Four of Now Is Gone, we talk about this “ping pong match” between traditional and new media outlets. From the draft material last June: 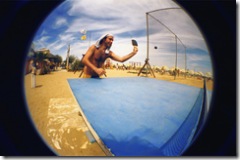 Ping pong matches demonstrate that weighting one tool by its actual total community and eyeball impact fails. As Seth Godin says in Meatball Sundae (see Buzz Bin review), it doesn’t matter if the socially generated earned media only gets one percent of the hoped for attention if it’s the right one percent (Image credit: Ping Pong Persi by Mas-Luka)

Brief definitions on the order classification from top to bottom:

Some practitioners will want to adjust my placement or add tools to the basic Livingston set. To make your own chart, download the long tail at Entrepreneurs Journey and Photoshop away. ;)