We had two more strong reviews this week from Communication Overtones Blogger Kami Huyse and Valley PR Blog‘s Linda VandeVrede. We are also featured on Rohit Bhargarva’s Ultimate Marketing Bookstore, which raises money for DonorsChoose.org (a site which allows teachers to submit funding proposals to ask for help doing something they don’t normally get the funding for).

Thank you to Kami, Linda and Rohit. If you are thinking about purchasing Now Is Gone, please support Rohit in his effort. There is no additional cost.

Since one of the first tenets of the book is not to control the message, we’re going to vet some criticisms that have surfaced in the reviews and in conversation. Here are the five criticisms which I have found most interesting and, in some cases, spot on (image credit David Airey graphic design from criticism post). 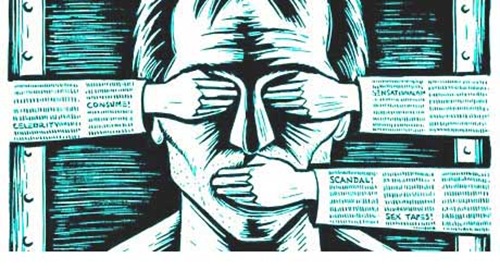 This campaign was a very high visibility effort that reversed a very negative approach to a prior Mentos/Diet Coke incident. Previously, Coke tried to clamp down on user generated videos and posts (instead of embracing them). So when Coke initiated it’s Virtual Thirst campaign it received a ton of blog ink as a successful approach towards embracing social media. That’s when the book was being written so I included it.

As to the actual results of the campaign, we don’t know what they are. The campaign just wrapped up. Did Second Lifers really embrace Coke’s virtual thirst social media? I’d have to ask my sources at crayon and C.C. Chapman if they could provide some measurement.

2) On page 127-128, I wrote up the relatively new Nikon D80 blogger relations program as a fiasco because of the many negative posts and ensuing controversy the program caused. Shel Holtz was also quoted as saying the blog discussion wasn’t the conversation that Nikon wanted.

Jeremy Pepper noted that the Nikon D80 program turned out to be a pretty good success. I have to agree with him. Tom Biro and crew did successfully get the D80 into the marketplace. When I was at Blog Orlando last September I noticed every blogger except Chris Heuer had a Nikon. Then I saw Tom speak. It seems a lot of negativity was actually jealousy and envy. And everyone really did want a Nikon. Kudos to Biro for a job well done.

Jeremy added, “if you condemn the D80 program, you eliminate any way for any PR firm to do any blog outreach and review programs. There have been worse (Acer Ferrari/Vista) and some better (Nokia).

“I was at the LiveJournal party this week, and a well-respected blogger and photographer said to me, ‘You know, that Nikon program was great. People see you out at events, and they know you are shooting with a Nikon camera and that you take great photos.'”

3) Nikon is a perfect segway to criticism from Chris Thilk, Biro’s comrade in arms, on the Open Dialogue blog. Chris has several criticisms in what has been the most lukewarm review to date (he still recommended Now Is Gone). The one that’s interesting from my viewpoint is this comment on blogger relations:

At one point Livingston warns public relations practitioners that if they send out a heads-up to bloggers and that pitch does not result in the story being written up then it’s a failure and they need to scrap the entire program since it’s obviously not adding value to the larger community.

While I agree that PR people should approach bloggers carefully (that’s why it helps to have someone who knows the community and that language) and that pitches need to be individually crafted to make the story as valuable to the blogger as possible I don’t think failure to achieve pick-up is a sign of a bad program… Since blogging is so highly personal – even if I’m not blogging about personal matters – sometimes I just can’t get excited about a story that would normally be right up my alley. Bloggers are moody, something that occasionally renders any hard and fast rules about engagement moot.

I absolutely agree… if the pitcher is an experienced blogger relations pro like Chris or Tom. However, because the book is written for executives and entrepreneurs that have almost zero to basic experiences in social media, I stand by the original statement. It’s a primer, not a detailed how-to guide.

Folks that are new to social media don’t know how to pitch bloggers, and when they do, they end up in positions like these. Encouraging them to send a “good pitch” to bloggers when they cannot judge what good is? You may as well send a lamb to its own slaughter.

OK, both Chris and Tom have a lot of great value to add to the marketplace. It would be excellent if they wrote a white paper on blogger relations. If they do, I promise to promote it on both Now Is Gone and the Buzz Bin.

4) Debbie Weil and Kami Huyse pointed out the writing was rough at points and could use some more editing. They are correct, we made a conscious decision to sacrifice quality and rush the book to market so the information would be relevant.

The book was finished at the end of June and sent to print just four months later. The last chapter was literally written two days before the book went to press. Also, please keep in mind Bartleby is a small press that may publish eight to 12 titles a year. Their resources are not as deep as Putnam.

Was it worth it? Having just read Meatball Sundae, yes. Seth’s book is better written, but the information is much older than Now Is Gone and it won’t be released until after Christmas. Now Is Gone is rougher, but much more current, and has been out for a month now. Meatball Sundae is a good book that will be read by many, many more folks, but I believe on a case by case basis Now Is Gone will have more pragmatic impact.

Even then, the book will not have much value in two years. Trying to pin down a primer on social media is like trying to down a running cheetah with a bee-bee gun.

5) “Anyone can write a book.” “Writing a book is the new MBA.” Comments like these are just based in ignorance.

Think I’m wrong? Go for it. Write a book, try to find an agent, and get it published by a real publisher, large or small. See how hard it really is.

And for the record, getting my MA at Georgetown was a lot easier than the 15 year trek from my first manuscript to my first book as primary author. As I told Ike last August:

I’ve been trying to get a book published since the early nineties. Finally did it. No one will look at the decade plus of stops and starts, and the thousands upon thousands of hours practicing the craft. They’ll only look at the event.

Four months later, the accuracy of this quote haunts me.