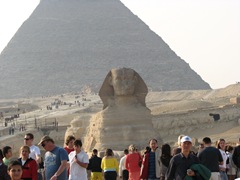 Global neighborhoods continue to evolve. Social media grows in every country, but in unique ways as each culture and political system allows. A trip trip to Egypt revealed a vibrant and unique social media scene dominated by Facebook.

Facebook is regularly a top ten web site in the Middle East, and the third most popular site in Egypt. The big driver? From my conversations with local social media users, Facebook’s mobile platform.

Some of the friends I made in Egypt thought millions of local citizens were on the network. Indeed, within the Egypt network there are more than 300,000 members alone (Total population is close to 80 million people). And not everyone joins they’re local geographic network. There are country and culture specific applications, like Quran Verses.

Other forms of social media like blogging are gaining popularity in Egypt, too. Arabic blogs take precedence, but there are some English blogs as well.

Unfortunately, the Egyptian government, led by President Mubarek, monitors posts. Sources said that bloggers who criticize the government have been visited in the middle of the night, and sometimes disappear. This continues the Mubarek regime’s censure policy. So Egyptian blogging has its dangers, too.

My new friends also indicated that almost all age groups are enjoying Facebook. But my visits to three Internet cafes revealed a primary user audience in its 20s and 30s. One cafe seemed to be filled with hard core gamers and video users. Pretty cool.

All touring photos from my trip can be found on Flickr.