While we like to focus on the business impact, there’s a larger trend demonstrating social media’s dramatic new influence on traditional media. Yesterday, the Washington Post reported that fan generated media plays an increasing role in sports coverage.

In several respects, what the Internet-based blogs — or “fan-generated media” — chatted about in 2007 mirrored the major story lines of the stick-and-ball sports that dominated newspaper pages and TV ratings, according to Kathleen Hessert, the company’s founder.

But in other instances — such as the remarks that cost Don Imus his wildly popular radio show — bloggers were ahead of the mainstream media, buzzing about the comments disparaging Rutgers women’s basketball players for days before it became national news.

We’ve seen some great sports blogs arise in the past year, including several player blogs like Curt Schilling’s 38 Pitches and Gilbert Arenas’ All Star Blog. A Technorati search yesterday revealed 1,076 blogs related to the Red Sox. Here in Washington, there are 295 blogs dedicated to the Redskins. These blogs have provided great venues for fans to voice their opinions about their teams. And capture a larger community perception about the stories they care about. 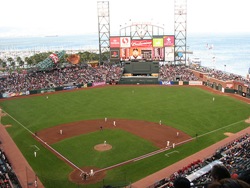 Ultimately, the media serves its readership (though some will say they serve their advertisers). That’s why all publications worth their salt have editorial missions.

By monitoring their readerships’ content — and more important their commentary — reporters can better serve their readership with stories they care about. In fact, the story can offer greater context and authority to the larger issue because a reporter is a professional subject to editorial review and fact checking, at least the better publications (Photo taken by me at AT&T Park).

In a phone discussion, Chris Heuer commented, “It’s really great. Because now with social media the media has more source material. Before they pretty much were limited to PR sources, the wires services, and police reports for story generation.”

At the same time, fan- and athlete-generated content keep both the team and news outlets honest. Consider how fans basically caused the Red Sox to resign World Series MVP Mike Lowell (for example, see Surviving Grady’s coverage of the Lowell situation in November).

A Trend That Touches Home

In life, when you endeavor to write a book and subsequently serve its readership, you make personal sacrifices. For me, I have largely given up following sports, in particular baseball and basketball. It’s my hope that when (or if) Now Is Gone winds down to re-engage as a fan, and perhaps re-purpose Now Is Gone time into a sports blog.

My personal favorite sports blog is 38 Pitches. An old Schilling fan from my years in Philadelphia, I always felt the media gave him a bad rap for being too vociferous. 38 Pitches, which regularly has hundreds of comments on each post, lets Schill call it like he sees it. Oh man, does he ever.

Schill has called out the media, his colleagues and himself, regularly. He highlights experience of pitching, and a players viewpoint of the game, giving us a rare view of a future Hall-of-Famer’s experiences. In the process he has become a hero, and now the media reports on his views as an industry leader as opposed to a loose cannon.

On Twitter, a few friends highlighted their favorite sports blogs:

Sports Media Challenge provided the Washington Post much of its data for the story. The company also maintains an index of top sports blogs. Check it out!