There’s a ton of market research coming out revealing continued increases in consumer use of social networks and other social media forms. Most of these numbers show the United States is experiencing numbers that put it in the early majority phase of the adoption cycle, as outlined in to Everett Rogers’ Diffusion of Innovations theory. 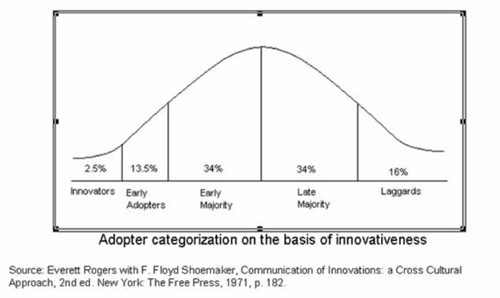 The Deloitte “State of Media Democracy” report holds the most bullish numbers I’ve seen to date. While they represent a sampling of the population (more than 2,000), the numbers are hard to deny. Other studies confirm the trend.

Through friend Jim Turbin at Ignite Social Media (a great blog, subscribe now!), we have access to another study. According to the report by Strategy Analytics, more than one billion broadband users will be actively using social media applications by 2012, which is only 5 years from now. Currently, there are estimated to be 373 million users worldwide.

What Does Early Majority Mean?

All of these numbers show higher usage numbers, and that social media has become an acceptable content form for a significant portion of the U.S. population. It’s apparent that Americans see participatory media as a viable alternative to their already existing set of media options. It doesn’t mean that old media forms are going away (at least most of them), but the competition for consumer eyeballs has intensified.

I became intimate with Roget’s Diffusion Theory at Georgetown University as part of my graduate work. Early majority means the era of early adopters is over, that the innovation in question has hit mainstream consumption. The innovation is no longer perceived as risky or brand new, and has become accepted within the adopting culture as a viable alternative.

One outcome of the early majority phase for social media can be increased usage across more risk-adverse and conservative segments of society. So folks who are not necessarily afraid to try things, but want proven services will start dabbling.

For example, my 85 year-old grandmother joined Skype last week, and my 67 year-old father in law has active Facebook and Flickr profiles. Neither of these two are big technology wizards, but they are both active readers and use the Internet.

The future is never certain, and social media adoption rates could stagnate today, or even retreat. But it’s quite incredible to see numbers in the 30-60 percentile range. One must wonder where the numbers will be by July 4th. And dare we ask, will we be looking at the late majority phase by the end of the year?

For more thoughts on how the early majority phase of social media impacts traditional media, see Geoff Livingston’s manifesto, “Welcome to the Fifth Estate” on the Buzz Bin.