At the behest of several followers on Twitter (follow me here), here’s a primer on Wikipedia astroturf and reputation management. Wikipedia entries are generated by readers who post entries on topics they care about or edit entries with or in need of more information. The power of Wikipedia cannot be underestimated. The site is currently the number 9 most visited site in the world according to Alexa, and is always a perennial Google search favorite.

Wikipedia has very clear guidelines on submitting articles and editing, including the following:

Articles and other encyclopedic content must be written from a neutral point of view (NPOV), representing fairly and, as much as possible, without bias all significant views (that have been published by r eliable sources).

That means companies, campaigners, PR firms and other hired guns cannot edit themselves (or clients) or add their own entries. To do so is considered Astroturfing. Most notably, Microsoft got busted astroturfing on an open-source entry, prompting a public outcry against the ethics violation.

Last summer, I wrote on this topic in the Buzz Bin in a piece dubbed, “Astroturfing on the Dark Side of the Moon:”

Astroturfing is a slang term for false PR or fake social media in the blogosphere. No PR or marketing person wants to be dubbed an astroturfer. Wikipedia (not normally a great source) dubs astroturfing as, “formal public relations campaigns in politics and advertising that seek to create the impression of being spontaneous, grassroots behavior.”

Compared to this definition, astroturfing in the blogosphere can be considered three shades slimier. Much of the ethical bantering in the marketing and PR blogosphere tends to revolve around astroturfing or corporate social media-related incidents. And these incidents tend to have a mushroom cloud hovering above them. 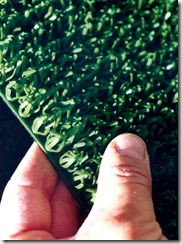 A lot of companies engage in astroturfing, most claiming ignorance when they are caught. But believe me, no one should engage in this practice because if caught, it forever taints your brand reputation. So don’t be quick to muddy the waters. And if you think you can edit Wikipedia addresses anonymously, think again. Wikiscanner demonstrates how editors trace IP address owners.

Is there such a thing? Difficulties in protesting WIkipedia postings openly and honestly have gotten to the point that most of the major PR firms allow their current wikipedia entries to be half-false.

Because of the encyclopedia’s adamant policy against corporate-based information (representing a conflict of interest), companies have to suck it up more often than not. WIkipedia will only create unbiased entries.

In order to be successful with a contested entry, lots of third party information has to be provided. So companies have to cite legal documents, public records, journalist accounts, and other points of view published on the Internet if they want to contest an entry. In many cases, companies will not be able to provide this kind of factual accounting to write their ship. In fact that’s what caused Microsoft to engage in its astroturfing incident.

In such situations, Wikipedia founder Jimmy Wales recommended the following:

Wales said the proper course would have been for Microsoft to write or commission a “white paper” on the subject with its interpretation of the facts, post it to an outside Web site and then link to it in the Wikipedia articles’ discussion forums.

This is an OK way to handle it, and you should make sure any counter points are posted on the corporate blog in case someone searches your site for more information. You also have to combat the Wikipedia results that Google will serve. For an excellent read on Search Engine reputation management I recommend this post from Andy Beal, “Ten Ways to Fix a Google Reputation Nightmare.”