In the Name of Love

As this a blog that primarily caters to businesses and individuals adopting social media, half of our readership will be out today in memory of Dr. Martin Luther King. And of course, social media sites around the country and the globe feature the late peace warrior, from idle reflection to full posts dedicated to King. Here are some examples: 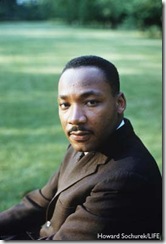 It’s important to reflect on King’s legacy. Perhaps no greater example can be seen then when race became an issue in the Democratic primary early last week. Both Obama and Clinton came together very quickly to stamp it out, and successfully made race a non-issue for the Nevada primary. Though the tension still exists, it’s not tolerated publicly.

Even more importantly, both Hillary Clinton’s and Barack Obama’s substantive runs for the presidency demonstrate to me that this country has come a long way. We have changed and ready to elect either a woman or an African American as president. Yet, we cannot rest on our laurels against racism and prejudice. And perhaps that is what today’s holiday is about: Recognizing progress, yet understanding there’s more to do.

What are your thoughts on MLK day?