The Bad, The Ugly and The Good

An extensive piece on the future of business social media was published yesterday on the Buzz Bin. While a little too futuristic for the average marketing exec just trying to figure out social media, there was a very relevant section, which was a carry over from previous conversations about business social media and personality:

Like Shel, I also disagree with Forrester’s Josh Bernoff that companies can act as an entity in socialized worlds. Because of the very nature of social media, it will be much harder for companies to diffuse their messages as an entity… Instead, personality must be infused into social environments. Identifiable people that work inside companies must represent the entity.

This strong stance finds it basis not in purists as Josh would state it, but because the social environment itself is inherently relational and community based. Without identifiable people to associate with, companies become inherently monolothic, relying on the brand identity to communicate. By its very nature, this is antisocial relying on something to build trust that even political pollsters know just doesn’t work – that’s corporate identities.

At bare minimum, corporations need to use an avatar or a personality to associate with the social media effort. For example, Nokia’s Mosh uses Russell the empty shirt and Goodwill of Greater Washington uses the Fashionista. In short @richardatDELL works a lot better than @DellCorp. 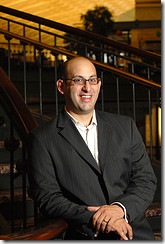 Ah yes, the suit. Mr. Safe and Corporate. Who trusts this guy (geez, these are my book photos)?

Point being, this shot was intended for book promotion to a community of business managers just trying to figure out what social media is. I mean, if its the Rayhteon blog targeted towards defense buyers, maybe, but otherwise, where’s the soul? It in its own right this photo is not ideal for social environments because its too stiff and formal.

Let’s be frank, would you rush to go talk to this guy in his office on your coffee break? 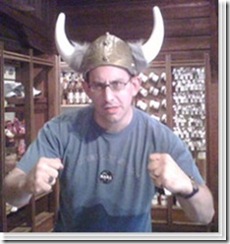 Oh yeah! The prototypical crazy blogger! This meets the general executive perception of a blogger, a member of an unruly horde. People are afraid of this guy. While it may get fans in some social media circles, this type of avatar is not likely to appease executives trying to bridge the gap between formal corporate communications. 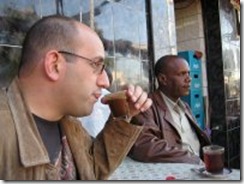 Finally, a happy medium. Turkish coffee in Aswan Egypt is quite good.

This is the persona of a real person, an identifiable person, the fellow next door, that you would talk to on a coffee break. Real enough to socialize with, yet refined enough to engage in a conversation.

There is no one-size fits all approach to corporate personalities in social worlds. What’s most important is that conversational marketing include it. With personality comes a sense of authenticity, rather than an ivory tower that people think may screw them over for a profit.

Rohit Bhargava has an excellent book coming out on this topic, “*Personality not included.” Parties interested in this topic should pre-order it today.