And you thought the Elliot Spitzer scandal was amazing. It’s rare when you see a sex scandal this bad. FormulaOne is facing an epic scandal that can crash and tarnish its brand with a permanent haze of anti-semitic debauchery. 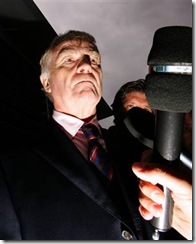 It seems impossible to imagine a scandal like that. Wow! And yeah, as a Jew, I’d have to agree with the News of the World. This is absolutely despicable.

Mosley, a powerful man in multi-billionaire industry, refuses to resign to date. For FormulaOne’s sake, Mosely must resign promptly. The automobile manufacturers will need to turn up the heat to force a resignation before anti-defamation protests turn into lost revenues.

In a twit response to this article, B.L. Ochman said, “Yecch! blecch! what a pig! http://tinyurl.com/6k5m56 car companies need to boycott the IAF ’til he resign.” Amen, B.L.

“Those Europeans sure now how to do their scandals, huh,” said Nicholas Tolson.