Does your company have core values? A mission statement?If so it likely has a corporate ethos, a statement of ethics and integrity that the company believes in. Hopefully, the statement isn’t  propaganda, instead reflecting the living culture of the entity. If it’s real, your company may already have an advantage.Companies struggle with personality and tone when going out to communicate in social worlds. At the heart of the issue is getting away from propaganda and spin, and embracing the necessary authenticity of social communications. 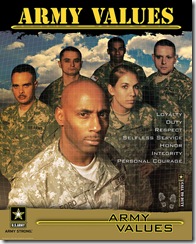 But you don’t have to look far. Consider Nuts About Southwest (recent flack on flight groundings aside). One of the things during our interview for Now Is Gone that became apparent was the blog’s tone exuded the corporate culture.  Not only the fun, but the way the company reacted to comments and other issues.When a company or social media effort exudes an ethos it attracts that same type of person back. In theory, cultures are developed around customer bases or a defining principle that caused the birth of the entity. So by communicating that clearly, a company attracts the type of potential customers and followers it wants. This can swing both ways, too (image by soldiersmediacenter).Consider the recent popularity of 1938 Media’s videos at Shel Israel’s expense (note: Shel is a friend).  This hard hitting “humor” has in many people’s minds crossed the line into personal attacks. At the same time, 1938’s generating business from this. But what kind of business is it?  If it is dollars you want, dollars you get.  But perhaps a deeper evaluation of the larger brand impact is needed. Gossip attracts gossipers… What does attack-style mockery do? Is this really a long-term play for Loren Feldman?It’s important to note that in both of these cases the actual actions determined the entity’s ethos. You can’t just say you have a certain set of values. Actions in social media unintentionally reveal ethos and values.Social media is really no different than real life. It’s just a different scene with a new ambience. But corporate actions demonstrate true values. So when you consider what you want to do in social media, think about who you are first.