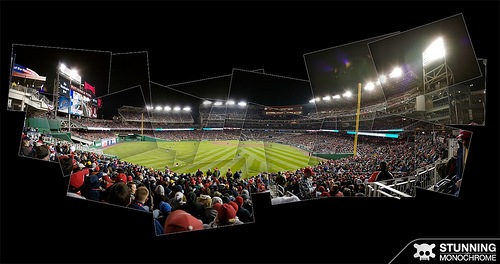 Well, the team is horrible. Let the fire Bowden meme begin, he certainly deserves some blame after three+ years of ineptitude. Yeah, Austin Kearns. Wow. But perhaps even more disappointing is the new Nationals stadium (image by StunningMonochrome).

Yes, it’s get every amenity, including funky corners in the outfield. The seats are great offering outstanding views throughout. Standard amenities, Build-a-Screech workshop, Five Guys and Hard Times, even a place to play Guitar Hero. Another thing of note is the huge scoreboard.

But the ballpark has no soul.

Sorry, I’ve been to enough ballparks to know. New ones like Camden Yards, PNC Park the Jake (yeah, I won’t call it anything else) and AT&T park are all superior. Even the second tier of newbies like Coors Field, Tiger Stadium Citizen Bank Park are better than this. Let’s not even get into Wrigley or Fenway.

The problem is the lack of character. It’s supposed to be a ballpark, not a bad rip-off of a second tier Cooperstown museum. The painted all stars from yesteryear just show that the city doesn’t have any baseball nostalgia of its own. And the reflection of Washington in the architecture is just bland. Maybe that facade is an accurate depiction of a federal building.

In short, Nationals Park is a functional place to entertain someone for a few hours, but no place to stir your soul. As bad as RFK was, at least it had a sense of fun to it. I miss that old dump.