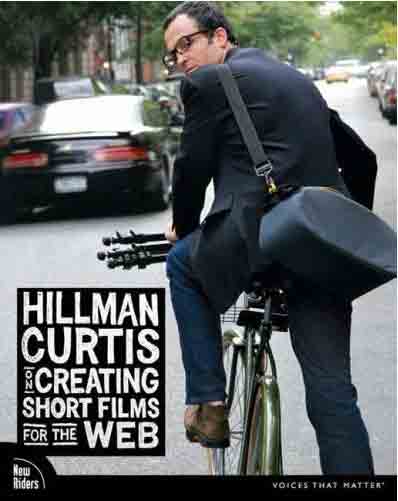 “Perhaps it sounds ridiculous, but the best thing that young filmmakers should do is to get hold of a camera and some film and make a movie of any kind at all,” Stanley Kubrick… The opening quote in “Hillman Curtis on Creating Short Films for the Web.”

Thank you, Hillman Curtis for your excellent book, Creating Short Films for the Web. It’s so cool to read your book and see how you learned video, then go and watch these fantastic videos on your site. And special thanks to Director Tom for referring me to Curtis.

See, I am walking around these days with a Sony PDX-10 just trying to figure out this video thing. It’s really hard, yet incredibly exciting. Since my book came out, I’ve been in a whirlwind of blogging and speaking… Yet though I am a writer, blogging has lost a lot of soul for me.

Off Hours has helped. But really it’s video that has re-ignited my creativity like a dying fire that three new logs thrown it with a healthy does of kindling, too. Reading Creating Short Films was the kindling. The fire blazes now. There’s joy and excitement to go out and learn film. It feels like Spring, not only in the air, but in my veins. Blood rushes when I think about writing a script, imagining a shot, or learning how to edit.

The book came at the right time, too. With all the hub bub from folks like Loren Feldman, Matt, and even my buddy Ike Pigott about how amateurs shouldn’t even pick up a camera. I was starting to feel a bit afraid.

This June I am taking a class on how to make a two-three minute feature that’s being given by the American Film Institute. Now, after reading Creating Short Films it is my hope to put together a real college try or two before the class. Perhaps I’ll try a couple of portraits like Curtis’s “The Visitors” series.

This week I am at NewComm Forum and I intend to really start figuring out this camera and what it can do. Fortunately, “New Media” Jim Long will be there, too. I hope to pick up some tips. I need to go buy a boom mic, too.

It seems fitting to end this post with Hillman’s first words in the conclusion: “I write a lot about the importance of reinventing oneself as an artist. It’s the path I’ve followed, and it’s part of the deal…”