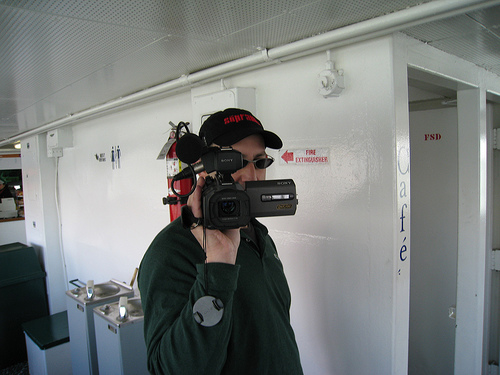 Those of you who actually read my personal blog, have probably noticed a certain absence of posts of late (image by C.B. Whittmore). That’s because in addition to my day job as CEO of Livingston Communications, I have been working on a film project called “Parasocial: Life in Silicon Valley.”

I am being taught by the AFI Workshop sereies (only certified courses on the east coast). It’s an exhausting, intense experience. Our teacher is Perry Schwartz, who is doing a fantastic job. Last week we wrote the screenplays. I’ve published mine below.

The screenplay is meant to be biting commentary on the micro pop culture we’ve created online.  This is the lighter side. Let us not forget the darker elements that occur in microfame like the Kathy Sierra threats, the stalker known as Brian Connolly/Amanda Chapel, and the horrific Valleywag culture that has arisen. Hopefully, this film will strike a chord and make people think.

We shoot it today, so wish me luck. I am sure I’ll learn a ton!