The Battle of Chicago 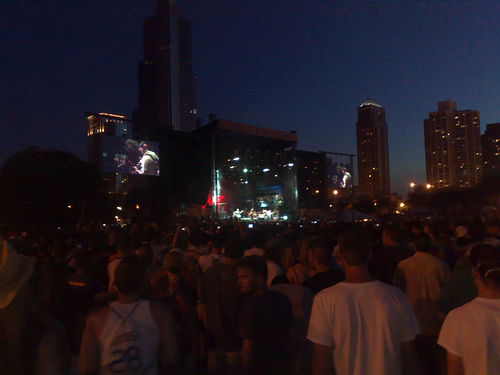 Number 56 on the 101 Things I’d Like to Do Before I Die is done. Rage Against the Machine was outstanding last weekend at Lollapalooza.

Rage’s “The Battle of Chicago” performance opened with hard hitting numbers Testify and Bulls and Parade. The enthusiasm to see the once-broken up, and rarely together Rage Against the Machine was too much for some fans who rushed the stage creating a very dangerous situation. For a while there it looked like the concert might not happen, and the band had to stop three times to try to stop the crush of people on the stage.

In the end the performance happened. They were not as good musically as Radiohead, a phenomenal performance band. Perhaps it’s the long lay-off and the extra years. But Rage was the band at Lollapalooza that won my heart. Because even though it has been almost ten years since their last studio album, their racially charged politics, the raw unchanelled angst, the timelessness of their message, and their unbelievable presence just wowed me.

I could not ask for much more. It was exactly as I expected. My favorite songs were Bullet in the Head, Guerilla Radio, Bombtrack, Killing in the Name, Sleep Now in the Fire, and Wake Up. Obviously, most of these songs are from their first self titled album, although a couple came from The Battle of Los Angeles.

For me the Rage concert become something special during Wake-Up. Zach de la Roche’s condemnation of the Bush administration, our current political structure, and even Barach Obama was just awesome. No punches were pulled. de la Roche said black and Latin America are going to give this country an offer that it cannot refuse.

This band has something to say still (Rage will hold a protest concert during the Republican National Convention). It does not believe in our country, and its politics, or the continuing exploitation of Black and Latino America. That anger, that angst, these politics make Rage as relevant as it ever was.

I am so glad I caught this performance, and have not stopped thinking about it since. In parting, I have included the lyrics for Wake Up below as part of this post.

Come on, although ya try to discredit
Ya still never read it
The needle, I’ll thread it
Radically poetic
Standin’ with the fury that they had in ’66
And like E-Double I’m mad
Still knee-deep in the system’s shit
Hoover, he was a body remover
I’ll give ya a dose
But it can never come close
To the rage built up inside of me
Fist in the air, in the land of hypocrisy

Movements come and movements go
Leaders speak, movements cease
When their heads are flown
‘Cause all these punks
Got bullets in their heads
Departments of police, the judges, the feds
Networks at work, keepin’ people calm
You know they went after King
When he spoke out on Vietnam
He turned the power to the have-nots
And then came the shot

Yeah!
Yeah, back in this…
Wit’ poetry, my mind I flex
Flip like Wilson, vocals never lackin’ dat finesse
Whadda I got to, whadda I got to do to wake ya up
To shake ya up, to break the structure up
‘Cause blood still flows in the gutter
I’m like takin’ photos
Mad boy kicks open the shutter
Set the groove
Then stick and move like I was Cassius
Rep the stutter step
Then bomb a left upon the fascists
Yea, the several federal men
Who pulled schemes on the dream
And put it to an end
Ya better beware
Of retribution with mind war
20/20 visions and murals with metaphors
Networks at work, keepin’ people calm
Ya know they murdered X
And tried to blame it on Islam
He turned the power to the have-nots
And then came the shot

How long? Not long, cause what you reap is what you sow