So my old helmet was more than five years old and had been dropped several times, making it unsafe. I have already totaled one bike in an incident that involved my head hitting the offending vehicle (see there was this minivan).

Because I had a full face helmet on (an HJC), I walked with a grade two concussion, so I am a believer in safety equipment for your motorcycle. If I had one of those idiot skull caps that Harley riders seem to prefer, I’d be dead. I also wear full leather upper body armor, and still have a small road rash scar on my chest from that accident. In spite of the leather.

There are really two kinds of top-tier, super safe helmets, ranging in price from $400-$800: Arai and Shoei. I prefer Shoeis. My last one was silver for road visibility, and overall they suggest white, silver or yellow.

Given that my new bike will be fire engine red (on order), I opted to get a red helmet, but one that was patterned so it had elements of white and silver for visibility. Here’s what I chose: 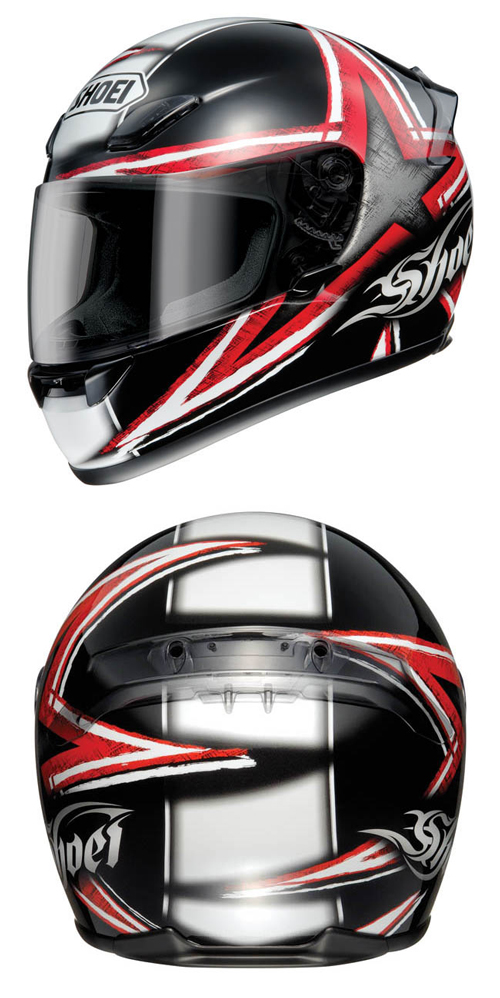 I kind of like the star (rocking!), and the gothic letter styling. It’s got the right kind of red to match my bike, as well as a fair amount of white and silver, which should adequately reflect headlights.  My leather also has a small V reflecter sewed in the back for such situations.  All in all, it’s a nice new add on to my gear, just in time for the new bike!