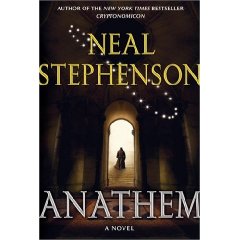 This September’s Anathem will be Neal Stephenson’s ninth book, and a long-awaited one at that (See WIRED). This will likely be the most anticipated sci-fi release since William Gibson’s Spook Country.

I’m an early Stephenson fan dating back to the mid 90s. I’ve turned dozens of people including friends, my dad, my cousins and even my father in-law into Stephenson readers.

Yet I wonder about Anathem. Why? It’s long, 950+ pages long. And I didn’t finish the Baroque Cycle, Stephenson’s last effort, a trilogy focusing on the Age of Reformation. Why? Because the Cycle was tediously long, 2500 pages. So was Cryptonomicon, but I liked that book, and rolled in my airplane chair crying over the pig scene. The hipness of modern cryptology and humor worked for me.

Snow Crash and the Diamond Age were by far Stephenson’s best works. There is a part of me that longs for a return to the brevity and punchy humor of those magical books. They did so well envisioning our current future… still. These two books were riveting!

Anathem aggressively focuses on an alternative universe, so it will be new territory for Stephenson. I’m sure it will fulfill many geek dreams. But before I embark in this new world, I may have to wait to see what the NY Times says first. Because 950+ pages is a real commitment. And I’ve been disappointed by Stephenson before. Let’s hope Anathem represents a return to Stephenson of yesteryear.