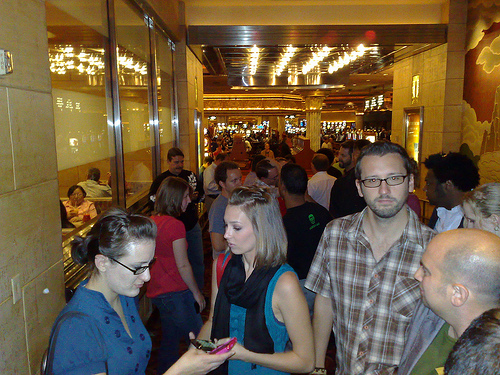 There’s no definition for the word Tweet-up readily available (Image from a Vegas Tweet-up during BlogWorld Expo)! Unfortunately, I needed one recently so here’s my alpha version. SOurces I used included floor9’s definition, Dictionary.com’s definition of meet-up and Twitter’s own definition.

Tweet-up is a coined word combining meet-up and Twitter. Meet-ups feature a local special interest meeting organized through a website, and Twitter is, well, probably the hottest and one of the fastest growing social networks out there. Officially, it’s a social network that, “In countries all around the world, people follow the sources most relevant to them and access information via Twitter as it happens—from breaking world news to updates from friends.”

Reduced to the simplest possible definition, a Tweetup is a chance for the local Twitter community to come together and meet face to face. This relaxed networking event involves fun, meeting at least one or two new people, and use of mobile phones, PDAs and cameras to update web sites. Because Twitter only allows 140 characters per post — a number of characters easily entered into a phone — this often leads to live tweetcasts of such events, particularly the larger ones.

OK, Tweeties, what do you think a Tweet-up is. I would like to submit this definition to Wikipedia, but want to make sure it’s kosher.