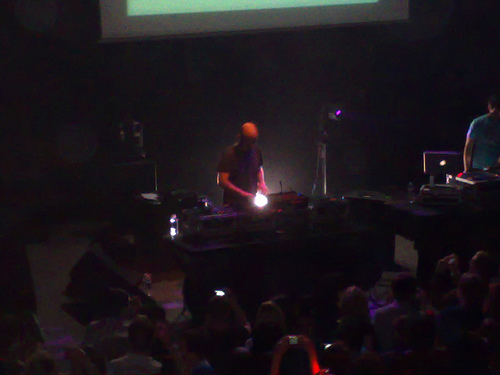 My first concert was in 1986, the Genesis Invisible Touch tour at the Spectrum in Philadelphia (photo is Moby’s Inaugural bash at the 9:30 club on 1/19). Since then I’ve been to well over a hundred concerts and live performances, ranging from MC Hammer to Lollapaloozas. Recently, I’ve seen Moby, Metallica, The Black Crowes, Oasis, and a whole host of bands at Lollapalooza ’08. All of these concerts got me to thinking, what are the best performances I’ve seen?

Well, here they are!

1) Pink Floyd, 1994 Division Bell Tour (saw them three times on this tour, once in Philly, twice in DC): Unbelievable band live, this is not a concert, it’s a magnificent audio and visual performance that rivals anything you might see at the Met. Yeah, I am serious. This tour was caught on DVD, and I still watch it now and again.

2) Social Distortion, Christmas show at the House of Blues, Hollywood, CA, 2000. Mike Ness and the gang always put up a real hard core, punk rock ‘n’ rolla. This one performance was particularly sound, and I actually flipped off Ness (showing respect for a fellow punk), and he nodded back. Too cool. If they ever tour in your neck of the woods catch them. I have five times in all and have never been disappointed.

3) U2, U.S. Elevation tour first leg, spring 2001. I’ve seen U2 four times, and the last two times have been metza metza, but back in the day they were just an incredible rock and roll band. I think Zoo TV was a better tour, but this show had my sister and I two yards away from the round, and Bono almost touched my sister, who was in a frenzy. The set was stellar, and the memory one that would last forever. 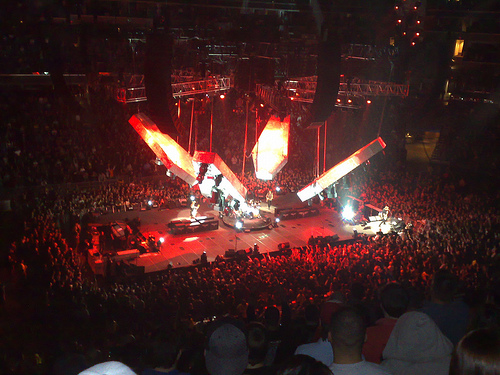 4) Metallica, 1989, And Justice for All Tour. I’ve seen these guys now four times (seeing a pattern here with my favorites? above pick is from last week’s performance), and I have to say that they are probably the best ass kicking band out there. Energy undeniable, and hard heavy stadium rock that cannot be denied is always good! On this particular tour they were just vicious, out to prove they were back from Cliff Burton’s death and touring on a violently political album. Great performance.

5) The Who, The Kid’s Alright Tour in 1988. Celebrating the 25th anniversary of maximum R&B< this set was just insane. They had no opening act, and played their greatest hits for the first half and Tommy in its entirety + Won’t Get Fooled Again as a closer for the second half. Sick. ANd the Vet in Philly was literally shaking, causing me to fear for my life initially. I caught them earlier this decade and they were still pretty good then, but not the same. 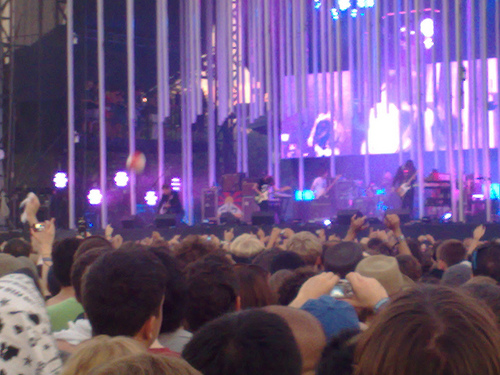 6) Probably the only one in the past few years on this list, Radiohead at Lollapalooza 2008 (pictured above) was just unbelievable. Like Pink Floyd, this was not a concert, it was a strange perfection of music, lights, energy and other sounds. They were playing Fake Plastic Trees singing:

She tastes like the real thing
My fake plastic love
But I can’t help the feeling
I could blow through the ceiling
If I just turn and run
And it wears me out, it wears me out

Meanwhile, real Fourth of July caliber fireworks were shooting off in the distance behind the stage. Visceral.

7) Eric Clapton, 1988. I caught him twice on the August tour. An unbelievable guitarist, Clapton kicks out some of the most amazing guitar solos and just plain old rhythm play you’ve ever seen. Further, this was a veritable tour through three decades of styles, from the 60s Hendrix like Cream solos to the 70s Cocaine era to the 80s poppy Clapton, this was just great. Very happy.

8) Jane’s Addicition, another twice seen band. This time I caught them after the reunited, but before Strays in 2001 at Nissan Pavilion in VA. It was a chilly October night, and they were damn good. It was at that point that I really did believe the Dave Navarro hype. He proved it to me live. Fricking insane!

9) Soundgarden, 1994. Chris Cornell’s first band was on the Superunknown tour at American University, and they ripped up the joint. Grunge was in its heyday, and they were peaking. A sick show that acutally produced a concussion for me compliments of a particularly violent mosh pit. ANd it also produced my last trip to a mosh pit ;) The show ended with the band leaving, and Kim Thayil left his guitar behind on the stage still reverberating his last chord.

10) Introducing Velvet Revolver at the 9:30 club. Pre album release, Guns ‘n’ Roses, oops, I meant Velvet Revolver, played in the most intimate of settings. This 2004 show was phenomenal and watching these veterans of hard rock dish it out with smiles and excitement was just incredible.

On that note, one more thing. The 9:30 club is clearly the best place to see a band in the greater washington region. I’ve seen several bands there, including Social D, Moby, Velvet Revolver, The P Funk All Stars, The Pretenders, Crystal Method, The Black Crowes, Dave Navarro, and many more. Everytime the venue has the best setting and acoustics for a show. It’s awesome.

What are your favorite concerts of all time?