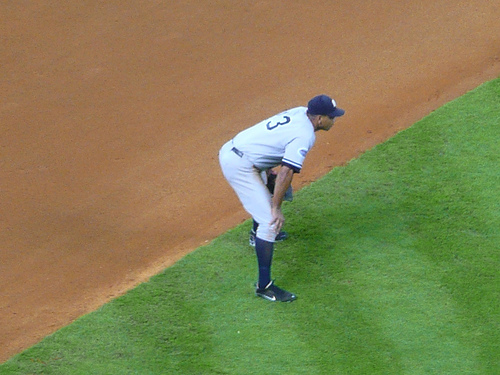 Steroids have been the bane of your sport (Arod image by William Holtkamp). It just happens to be my favorite sport, and that’s why I am writing this letter to you. So I hope baseball is monitoring online and that you read this.

I used to be a season ticket holder, and still go to 5-15 games a season. I’ve visited 19 ballparks throughout the league. I am your prototypical dream fan, and I need you to do something for me.

I know you’ve restrained tongue and pen, and waited for due process. You’ve tried to play as fair as possible with the union, and honor the fact that steroids and drug testing were not officially banned for a time period.

But now you need to change that. It’s time to invoke some action in the best interest of the game. Yes, I know you have to wait for due process with Bond, but A-Rod’s admission that he has done steroids is the last straw. It’s time to revoke records and awards.

Three MVPs Ken Caminiti, Jason Giambi, and now A-Rod have admitted use. Their MVP titles should be stripped (even post-humously) and given to the runner up that year. If Bonds is found guilty, all of his steroids MVP awards and records from ’98 forward should be taken away. If Clemens is found guilty, he, too, should have any awards given to him during this era taken away from him. Let an asterix be affixed to any known steroids user’s records.

The game’s honor has been sullied. Restore it.