350, the number of parts per million, the level scientists have identified as the safe upper limit for CO2 in our atmosphere. It’s also the name of an open-sourced campaign to create an international day of climate action on October 24. The goals are simple:

The campaign has already organized more than 2000 events, and has won the attention of climate-action heavy weights like Al Gore. As we move through Blog Action Day this week and into next week’s Day of Action, the group and its movement is sure to pick up more steam. 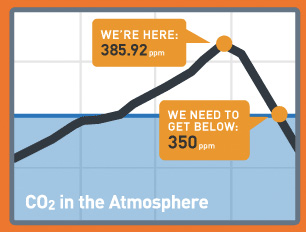 What strikes me about 350 is not its political tone, rather its motive of raising interest and connectivity amongst climate-change minded individuals throughout local towns, regions and globally. If there’s one thing I’ve learned working with environmental organizations over the past year, the greatest battle is not the politicians, rather the everyday citizen and his/her apathy towards climate change.

More about the topic on Blog Action Day this Thursday, but in the interim it’s outstanding to see 350’s work. If you don’t have plans yet for October 24 find or create an event in your area.