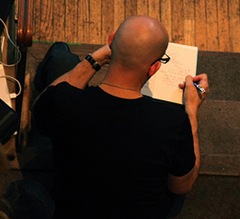 As many folks know, I will be traveling quite a bit over the next two months (and also wrapping up a couple CRT/tanaka projects). Rest, reflection and preparation requires significant time for contemplation, etc. To achieve that one needs to separate from the day-to-day grind, and for me that includes Twitter (image by Jen Consalvo).

So to my Twitter friends, I am saying adieu for much of the remainder of 2009. It’s my intent to post a blog periodically, especially right before the big Copenhagen Conference and with an occasional travel update. Those posts will be sent automatically to my Twitter feed. A random picture or two may make its way out there as well.  I may even check in for a chat once in a blue moon (or I may not). But for the most part, don’t expect to see me.

It’s not goodbye, just a break.  I look forward to many new exciting conversations on Twitter in 2010.  Have a great holiday season, my friends!