A New Petition to Support the Bat Nha Monastics 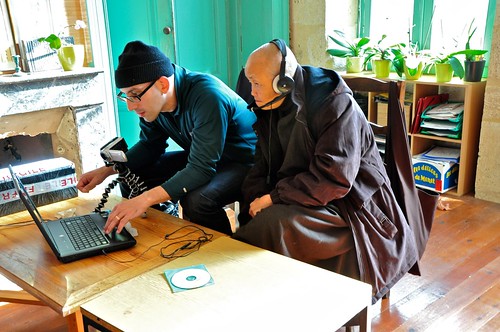 Above: Sister Chan Khong and I talk to Brother Phap Tu on Skype

Remember that petition to save Bat Nha that you helped me with last summer? Well it garnered 7,000 signatures and actually attracted the attention and help of Senators Kerry and Boxer. While the monastics were forced out of Bat Nha, political pressure eased until after Kerry’s November 9 visit to Viet Nam.

Unfortunately, since then things have taken a turn for the worse (see the Save Bat Nha site for updates). Under severe harassment and pressure to leave, which has become violent on occasion (see Phap Tu’s story below), the monastics have an uncertain refuge at Phuoc Hue temple, Bao Loc.

With the EU also weighing in, it’s time to garner global support for the monastics practicing the Plum Village tradition of bhuddhism, and ask governments to put pressure on Viet Nam to support religious freedom. Our new petition for Religious Freedom in Viet Nam seeks to garner the support of as many as 100,000 global citizens. Please, if you can, sign the petition and help these nonviolent, peaceful monastics.

And tell your friends, too.

The story below is from Phap Tu, a Bat Nha monk who is now in exile. His story typifies the types of violent harassment the monastics faced when evicted from Bat Nha.

On September 27, 2009, at around 8.30 am as we were just completing our morning walking meditation, a large mob including plainclothes policemen arrived. The mobs were raising hammers and shouting at us to get out of our Rung Phuong Boi monks’ residence. The policemen were filming the incident.

Knowing they were going to use violence, we locked our rooms, and a few dozen of us monks came to the upper floor and started doing sitting meditation. The mobs proceeded to smash all the glass doors and windows, one by one; then the came in, pulled our brothers out of their rooms, and forced them to sit in stormy, rainy weather.

Some plainclothes policemen with hammers forcibly prevented us from coming back to our rooms. My elder brother Phap Hoi and I were drinking tea together in the monks’ office. When the commotion began, we immediately put down our cups, closed our eyes and did sitting meditation. They used metal sticks to break the glass on our door, and dragged us out.

Other mobs went up to the meditation hall on the third level and dragged monks one by one down 36 concrete stairs, as if they were dragging animals. Many of our brothers were dragged with their legs in the meditation posture, including my brother Pháp Hội and myself. Our belongings (clothing, books, notebooks, sutras, cameras, etc.) were thrown out into the yard.

They tore our sanghati robes (the sacred monk’s robe) to tie our hands behind our backs. When they finally finished ransacking all the rooms, around 11.30, twelve taxis arrived and the mobs came, screaming: “Catch the 3 gangsters Phap Hoi, Phap Sy and Phap Tu!” We stayed together in circles and tried to hook our arms so that no one could break us apart.

At that moment a few sturdy women came to me and many other brothers in sitting meditation and grabbed directly onto our genitals, lifting us up with that grip, and so succeeded in breaking our circle and getting us pushed into the taxis.

I was pushed into the first taxi together with six other brothers. All of us tried to resist; we were thrown onto the rooves of the taxis and finally they succeeded in pushing us into the cars, seven monks in each. Some brothers lay down in front of the taxi wheels, so the police came and beat these brothers, so that they bled from the nose, the neck, etc.

The taxi driving me, the first one, went about 100 meters to the May Dau Nui building. One of my brothers knew this taxi driver, and said to him: “Please don’t take us to the police station.” The driver agreed and said he had been ordered by the Central Company to bring all the Mai Linh Company taxis to Bat Nha Monastery and, when they got there, to do whatever they were asked.

So he stopped and let us open the door to jump out. Then other taxis did the same, and allowed all the monks in the twelve taxis to jump out. To avoid being seen by the mobs, we went around to May Dau Nui Residence. I and one brother climbed on the roof of the residence and hid ourselves under it.

During the two hours I spent on the roof, I could see through a small hole in the attic wall a man that everyone in this group called Mr Thành. He seems to be the Chief. Having seen that the taxis had not followed their instructions, he ordered a plainclothes agent of the Bao Loc District police to call for police cars with blue license plates to come to Bat Nha. He also directed a number of other plainclothes agents — whom I know to be Dambri police — to drag my brother Phap Hoi out of his open-air sitting meditation.

They pushed him into a police car accompanied by four agents, and our brother Phap Sy was pushed into another police car with another four policemen. I recognized many as Bao Loc District agents and others from Dalat whom we all know. The way they pulled my eldest brother Phap Hoi was very violent; I saw blood on his nose, face and neck.

One laywoman at May Dau Nui, having seen the violence done to our elder brother, tried to put herself in between the plainclothes police and Phap Hoi, but he pushed her away and dragged Phap Hoi into the police car. Brothers Phap Hoi and Phap Sy were taken in the respective police cars to their family homes. (Phap Sy’s family home is 5 hours’ drive from Bat Nha Monastery. The car in which Phap Hoi was pushed drove him for two nights and two days before arriving in Hanoi.

Looking for me, Phap Tu, in the heavy rain, they forced the sisters to take off their hats and raincoats. The sisters ran to take shelter in the Bep Lua Hong Residence (150 meters away). At 6 .00 pm the plainclothes and uniformed police officers all took a break for dinner.

I quietly climbed down from my hiding place and happily saw a few brothers in different corners. They immediately urged me to escape quickly, before the police came back to arrest me. My brothers formed a group of ten to walk out of Bat Nha monastery, with me in the middle of the group.

When we had gotten far away from the mobs’ dinner table at a nearby restaurant, we stopped a motorbike rider. He agreed to bring me to a farmhouse, via a woodland route since policemen were posted on every road. From that farmhouse not far from Bao Loc city, my host called for a Phuong Trang Company car to take me to another house, on the national Dalat- Bao Loc –Saigon highway. From there I called a Mai Linh taxi to bring me to the nearest big city.