Fear and Loathing at U.S. Customs – A Profiling Experience? 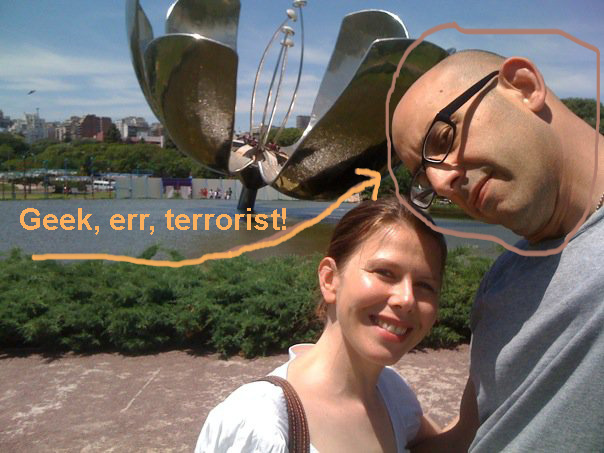 The above photo features me nine hours before my international flight to Washington, DC

Many have heard about the “crackdown” on international flight security since the failed Al Qaeda Christmas day attack. And after my experience, there’s much to fear and loathe entering the United States.

Flying back from a fantastic one month trek through Argentina, the Buenos Aires International airport was backlogged with hard core security lines, a result of new provisions for U.S. bound flights. This was an unpleasant, nasty experience, but frankly expected after the well publicized news that U.S. in-bound security had reached new levels of strictness.

What was not expected was the unusually nasty Customs and Border Patrol experience AFTER the flight at Washington Dulles. Apparently, even after you land & you are a U.S. citizen, you will be heavily screened as a potential terrorist.

It was clear that I had been profiled. I currently have a nice tan, a two day beard and am a dark looking Jew. My thick Philadelphia accent is a clear marker for the Middle East, too.

The first Customs agent looked at my seven year old passport and asked me to lift my beanie to check my hairline to match the photo (seriously I am balder. Please forgive me.). Then I was grilled me about why I shaved my goatee seven years ago… Ironically, I had to provide a new picture and finger prints (this has privacy issues in its own right) one month ago at the same facility on return from France. Guess the agent hadn’t looked at the screen or DHS hadn’t updated my profile.

After, a couple minute grilling, I was cleared to get my bags. I did, and then got the fifth degree again upon exit. I was asked why I was abroad for a month, what I was doing in Argentina, etc. The process was clearly heading to full-on bag inspection until the agent asked my profession and then grilled me on what a blogger was. As soon as Twitter and Facebook were mentioned, I was cleared to go with a suddenly amiable attitude.

Mind you, I am a U.S. citizen. I can’t even imagine what it’s like to be foreign citizen coming into the United States. Especially, a swarthy fellow with a “questionable” passport.

It seems to me the Obama Administration, and in particular DHS, has already given a victory to Al Qaeda with this kind of post flight treatment. In my mind, a crackdown like this, a reaction to the Christmas Day attack, finds its basis in fear and not logic. As a result, we hurt our travel industry and our global reputation with Draconian measures.

In fact, perhaps reviewing and improving measures should have occurred first rather than simply “cracking down” with more bad and useless procedures. I’m just going to say that the Department of Homeland Security has overemphasized post flight security, which does nothing to stop airplane incidents and hurts the travel industry. Instead of acting out of fear, we should act more mindfully and address the causes of terrorism.