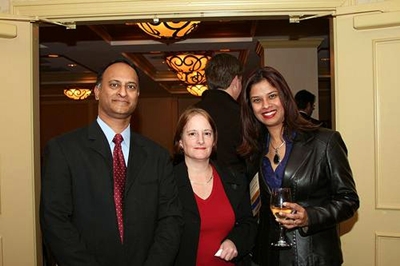 The first conversation was fascinating, discussing which media properties mattered most, new or old. Instead of the usual black and white debate, Sherman noted that it really was a question of the stakeholder and the media forms they prefer. Neptune also noted that influence was determined media outlet by media outlet, not by traditional or new form. This matches the larger trend of confluence we are seeing between new and old media forms in the current marketplace.

All of the panelists agreed that organizational culture still continues to be the biggest barrier to success in social. It became apparent that determining how (or if) to embrace social needs to be a much more thought out process for organizations, particularly those with conservative cultures.

Both Sprint’s Taylor and Bellamkonda noted the important impact that mobile was making. Taylor added that the industry broke a record with mobile fundraising for Haiti. Shashi added that anyone could communicate using mobile, and noted Twitter as a primary example, as well as its importance to companies.

Later in questions and answers, the NBA’s suspension of Gilbert Arenas was noted, in particular, whether or not the league had a right to stifle Agent Zero’s tweeting. Bellamkonda noted that if its illegal, employees cannot be talking about it. Panelists all agreed that the NBA had to act to protect the Bullets, er Wizards, image.

Also of note, IABC-DC President Shonali Burke celebrated her birthday at the event. She used social tools to make her 40th a fundraising endeavor for Kids with Cameras.