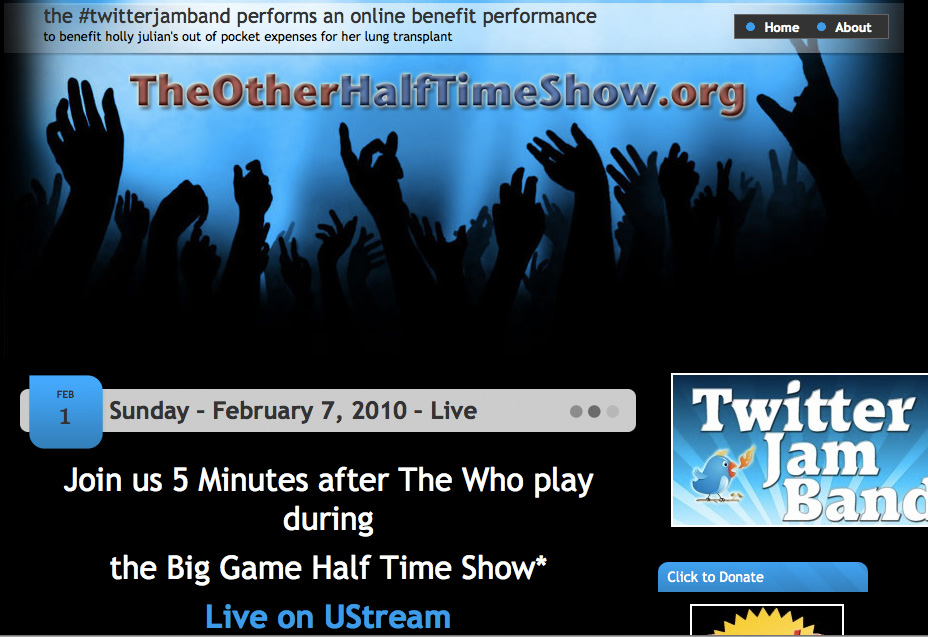 Note from Geoff: Zoetica is training the COPD Foundation team this week on social media best practices. Along the way, we discovered this Hugs4Holly Super Bowl effort, being supported by some of friends in San Antonio like Alan Weinkrantz. Collectively, we decided to support Holly and friends in their efforts as part of our training. I hope you will, too, this weekend.

This Sunday, there’ll be another Superbowl halftime show after “The Who” leave the stage. Immediately following, Twitter Jam Band will be streaming live online to raise $100,000 for Holly Julian. 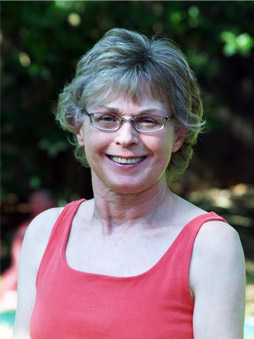 Holly, a COPDer who quit smoking in 1992 after 25 years, is facing a double-lung transplant at University Transplant Center in San Antonio, Texas. Julian, along with husband Steve Julian, the National Foundation for Transplants and a team of friends, created the Hugs4Holly campaign to raise money for her transplant.

COPD is the fourth leading cause of death in the U.S. and the only chronic disease growing in mortality. It affects approximately 24 million Americans but only about half of them are diagnosed. COPD includes chronic bronchitis, emphysema, and adult onset (refractory) asthma. Symptoms include breathlessness, wheezing, and chronic coughing. The COPD Foundation talked to Holly just days before the Superbowl to get a better understanding of what her goals are.

Q:Tell us your story. When/how did you find out you had COPD and what was your reaction?

A: When I was in my mid-thirties, I had a respiratory infection and went to see my family practitioner. He told me at that time that I had COPD and I just scoffed at him. I remember telling him, “Don’t say that! Only old people have COPD.” Well, I was wrong.

Q: How did “Hugs4Holly” start? Where did the idea of fundraising for your transplant at the super bowl come from?

A: Hugs4Holly began with the fundraising team of friends we have. In order to cover expenses not paid for by insurance, the University Transplant Center suggested fundraising. We contacted a non-profit organization that focuses on transplant patients, National Foundation for Transplants, and they helped guide us in this endeavor.

Q: What are your thoughts on the attention “Hugs4Holly” has received from the online community?

A: We are amazed and grateful for the attention this has received! Mostly, we are inspired by all of the people helping us.

Q: A COPD diagnosis is life changing. What are some ways in which you had to make a lifestyle change to help overcome challenges and still be able to live with COPD?

A: When I was diagnosed 17 years ago, the doctor said I should “get my affairs in order.” First, I changed to a different physician. He helped me get stable using new medications. Then I began exercising. With the doctor’s guidance and my determination, I became the best I could be despite having COPD. Now, I am using oxygen 24/7 and the important things are to follow my physician’s advice, continue exercising as much as possible, and continue to fight.

Q: You are one of the success stories for quitting smoking. What message do you have for those who smoke? Any tips to help them quit smoking? What else are you doing to help spread the word?

A: The message I have for smokers is that nicotine dependence is an addiction. In order to quit, they need help.

The items that are available today are helpful by eliminating one element of smoking, just enough to allow a person to deal with other aspects. For example, physical addiction will be reduced and then someone can deal with the psychological part of it. I spread the word one person at a time. They have to have a desire to quit.

Q: Many COPDers blame themselves for “having brought” the disease onto themselves. What can you say to these folks who feel ashamed for having COPD?

A: You can’t go back or beat yourself up over having the disease. Just go forward and do as much for yourself as you can. Stay off of cigarettes, follow your doctor’s advice, and exercise. The exercise will help make the best of the lung function you have.

Q: Who are you cheering for at the super bowl?

For more information about Hugs4Holly and the Superbowl halftime show, visit the Other Super Bowl Half Time site, the Hugs for Holly site, and RT @hugs4holly whenever possible. If you are watching the show and discussing Twitter, please use the #twitterjamband hash tag. The COPD Foundation will be supporting, too, via our Twitter account and Facebook fan page.