Not Buying It! Sponsored Media = Advertising 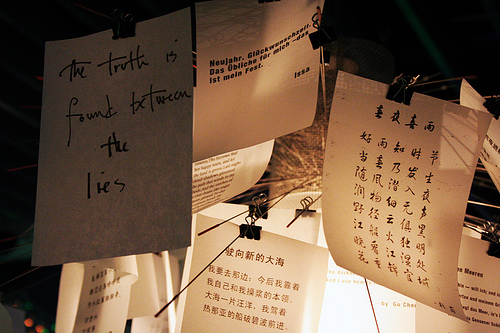 Sometimes the 2.0 world tries to reinvent some things, like advertising, and give it a new name (image by nocas). And so it is with the term, “Sponsored Media,” perpetrated by the likes of such companies as Pay Per Post, oops, IZEA, and TwitAd. These companies have even solicited, and in some cases, paid for the support of some of PR 2.0’s most celebrated voices in support of sponsored media.

The sponsored spin reminds me of the energy industry’s clean coal positioning. No matter how you greenwash it, it’s still dirty.

Ironically, the end result is less trust in peer to peer media. Why? Because some of the most trusted voices are now blogging for money, and can’t even do so in a clear-cut transparent manner by declaring these posts as paid advertorials (remember that term, media buyers?). Instead they hide behind the “new term” sponsored, which is in fact a retroactive term dating back to the 50s and 60s when broadcast advertisers were called, gasp, “sponsors.”

I’m not so disappointed in IZEA and the like. With the rise of new media power, it was inevitable that money would come along and seek various ways (good and bad) of becoming associated with the voice of the authentic amateur. 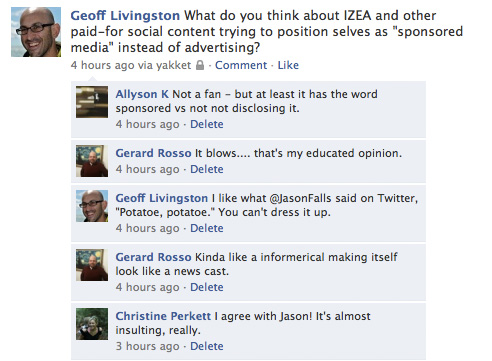 It’s understandable that some people see this as a legitimate means of monetizing their blog or Twitter stream. Selling placement on your blog/media property is. It’s also a Faustian dance where depending on how far below the surface you sink, you sacrifice trust and relationships for contractual riches.

My disappointment lies in those that go so far as to claim that they are ushering in a new era of media transparency; that they are leading the PR 2.0 revolution, and yet support — even promote — this sponsored media spin. As someone who has been along for a great portion of the ride, I am saddened by these developments. Some people who I hold in high regard look tarnished now.

Frankly, the term sponsored media fools no one. Except the people trying to rationalize their IZEA pay check.

Organizations: Don’t believe the hype. It’s advertising, and as such has value, but sponsored media is nothing more than the electronic advertorial. And no matter what someone tells you, the post will be met with less trust than a traditional one.

Bloggers/Media Owners: I think everyone understands that monetization needs to happen for some. If at all possible, try to monetize in different ways though, for this method sacrifices your integrity and trust factor, especially with frequency.

Also, call it what it is. The sponsored media bit makes you look slimy, and actually increases your distrust factor exponentially. Why? You look like you are trying to trick people. Readers will be much more accepting of the occasional paid placement if it is simply called an advertisment.