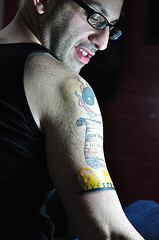 One hundred nineteen of us came together as a community to donate $5329.50 to the Armstrong Foundation. This moment in time meant so much to the immediate family members who are affected by cancer. Thank you, friends. Words are not enough to express my gratitude.

So many of you retweeted or Facebooked the messages. Of course, there are the 119 of us who gave. Most of us have been touched by cancer in some form, yet it was still surprising to see the outpouring across the social networks.

I created a special Twitter List, MySxSWFamily, so I can always follow you. If you donated and are not on the list, please let me know so I can correct this promptly! I may have clicked too quickly or could not find your handle.

Perhaps the best way to thank you is to write up a post on lessons learned. For me, this was my first major fundraising drive surrounding an event. I did use Facebook Causes last year on my birthday to raise $900 for an environmental cause, but it was not quite the same thing. So here you go: Best practices, just in case you decide to do something similar down the road. 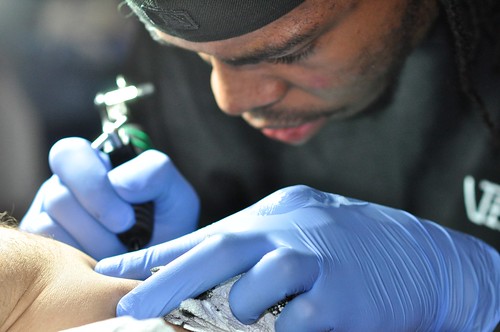 First of all, you need to decide to choose a cause and you have to believe in it. Watching close family members suffer like this has been tough for me, and I felt like I needed to so something. I was already aware of the Armstrong Foundation’s efforts.

It’s important to create a noteworthy event. Birthdays are great. I thought SxSW was a natural given that most of my social network would be there or would be following the events at the conference online. So I chose the interactive conference.

The payoff for the crowd was the tattoo. Obviously, this is a bit freakish and above the usual campaign goal. But in my case it was my seventh, I was considering getting another one already, I had an artist in Austin I had already worked with, and I was looking for a way to make a strong statement of solidarity for my family members. It was a no brainer. Welcome to the geek version of Miami Ink.

When you are in the frozen tundra, you can get lost, so when an eskimo shows up to help out, feel blessed. Allyson Kapin, Scotty Hendo and fellow Zoetican Beth Kanter were all there for me at different points, encouraging me when I was tired, making suggestions like crowdsourcing tattoo design (see below), tie in more family stories, make more of an event, etc. to compel my community. They told me what to expect.

There were two points were I almost gave in when I was “punch drunk” from the efforts and general SxSW prep: Thursday and Friday nights last week. My eskimos kept me going through the slog. Thank you so much, Allyson, Scotty and Beth. 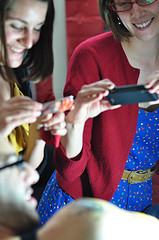 Part of creating a movement is not to dominate the movement as a personality, but to allow community stakeholders to do as they will and participate. It seems such an effort must be a we thing. Consider that many issues affect multiple people, and in the case of cancer, just about everyone knows someone affected.

So you want to encourage people to sound off, for example by choosing tattoo design. Let them RT, say what they will, and share their stories. Special thanks to Ed Shahzade for going above and beyond the call of duty to spread the word. You are a good man, Ed.

Some may even want to participate, as John Haydon did, adding his weight to the movement by agreeing to get a tattoo if we hit $6.5k. Not only let them, but embrace them.

I even created a Facebook event and invited people to the tattooing. Later on Claire Sale, Amy Sample Ward, Beth Kanter (see her photo set here), Andrew Bates, Michael Crider showed up and documented the blood letting, err, tattooing. It was really cool experiencing this side by side with friends, so thanks to all who contributed.

You need to keep asking. So create small manageable goals, like $500 marks so the community can feel encouraged. Create a time period where they know the drive will end, so they realize the ask is temporary, then do it often and frequently.

Creating new ways to ask and new stories is hard. It takes energy. There are times you want to quit. Don’t. No matter what, keep going until the end, whether you reach your goal or not. It’s important to see things through.

This is something we all learn growing up, but it’s still important. Working with Beth Kanter has reinforced this for me. She will take the time to thank and congratulate someone before attending to a business matter or blog post. She puts people first.

In each case, I tried to thank donors as soon as possible publicly on Twitter. It’s important to recognize people for taking the financial plunge with you. It’s the ultimate vote of confidence and support. Recognizing that and making them feel important for it remains important. And it encourages others to give knowing that they, too, will be recognized for their efforts.

One thing I did was use the LiveStrong grassroots platform. I didn’t want to deal with any contribution issues like David Armano did when he raised money a year ago. Using an approved 501c3 ends issues about what you are going to do with the money.

In some cases, people paid me in cash or via PayPal. In each case, I promptly entered their donation and amount, then tweeted it. I wanted to be fully transparent to the donor that their money had been donated.

That’s really it. What would you add to the list?

And once again, thank you to EVERYONE who helped. Together, we made a difference.