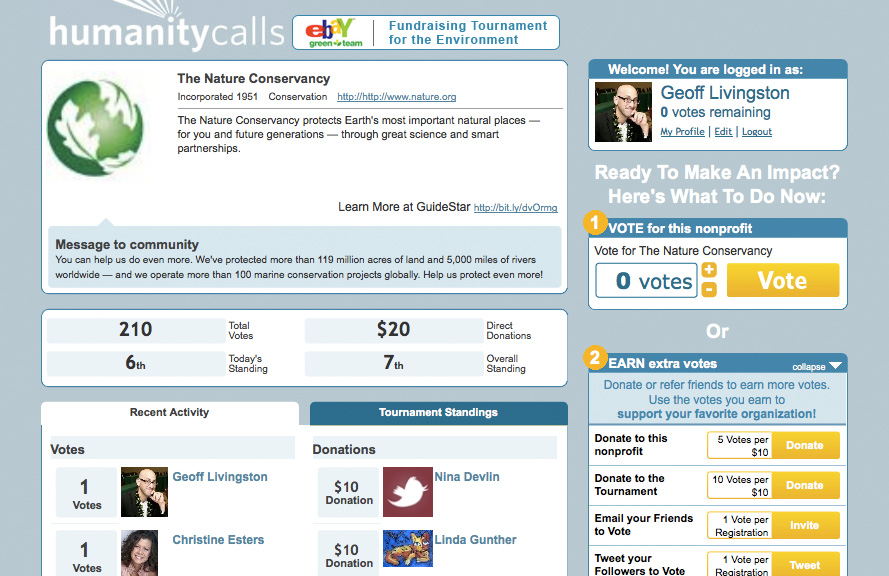 Do companies and their agencies of record think about cause marketing? One has to wonder when you look at the repeated free-for-all contest mania that corporate America and many nonprofits engage in. Look no further than the Humanity Calls/eBay tournament for environmental nonprofits.

One has to wonder when the marketplace and nonprofits will start saying no to these contests. It’s clear that corporate marketers won’t stop until the attention well dissipates. What’s worse is corporate marketers don’t even look at past contests for lessons learned and best practices.

“The problem with contest design is that it pits organizations against each other versus making it a win-win for all,” said fellow Zoetican and Changeblogger extraordinaire Beth Kanter. “The question for design:  What is the best way to create a win-win so that contests do not end up like a KOI pig out. In other words, how to avoid promoting scarcity thinking and switch to abundance of networks thinking…”

In the case of eBay, the contest throws the bloody steak on the ground for the dogs. More than 100 green nonprofits will participate in a new eight week style tournament for a grand purse of $50,000 provided by eBay. Thirty top green orgs will divvy the purse. If the crowd feels compelled they can donate some of their own money! After one week, the contest has raised $2k in additional funds.

From the press release: “Humanity Calls will invigorate the fundraising process and make it fun,” says Humanity Calls Director, Ron Bouganim. “Through game mechanics and social networking, many small acts of kindness can add up to real change on a planetary level.”

Tournaments and contests like this send nonprofits chasing their tails for the hope of elusive dollars. Unfortunately, they don’t consider that after it’s all said and done these dollars (if they win) will cost the nonprofit more in labor costs than the actual purse. Worse, these nonprofits become distracted from their core mission, affecting change, including meaningful fundraising. Especially when the purse is only $50,000 (or slightly more) divided by 30.

Oh, and the environmental change? Yeah, we have no idea how that will work out. Why? Because eBay and giving partner Humanity Calls have no theory of change, whether that be investing in clean energy tech, conservation, new recycling technologies, sustainable building promotion, etc., etc.

Who wins? Clearly eBay, which will have its name thrown all over the place. And we get to see gaming theory at play in the tournament, which is a new way to engage change via social tools. But the nonprofits and the environment? Well, I sincerely doubt that the overall impact outweighs the negatives, especially when the purse is this small. At least Pepsi had the decency to seed the Refresh contest with substantive dollars.