What Will Top Kill? 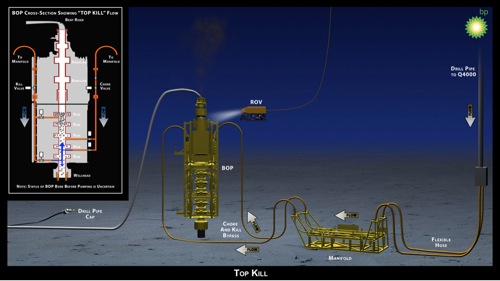 Thirty six days after the original Deep Horizon explosion and the beginning of the United States’ worst eco-crisis ever, BP will seek to end this oil spill nightmare with its two-day Top Kill procedure. The cement mud mix would effectively plug the well, the latest in many failed attempts to end the oil spill. In the latest effort to quell th spill and public dissatisfaction, BP will show the procedure live on video. But what remains to be seen is what will finally be killed, the oil spill or the last vestiges of public trust for BP and the Obama Administration’s crisis response team. 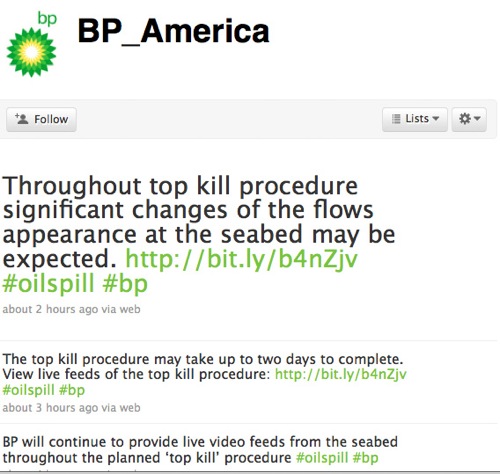 What BP Wants Us to Believe

One thing is certain, everything for BP and the Obama Administration is riding on Top Kill succeeding. If it doesn’t, the oil spill will continue for weeks on end, with no immediate back up plan announced by the oil company.

Public trust in BP, the Administration, and their various partners in this effort is close to (if not already) irrevocably tarnished by Deep Horizon. The crisis PR has been terrible with missteps on resolution, horrific transparency on possible solutions, false accounting of actual daily oil spill amounts, the policing of beaches to prevent media reporting, bickering between BP and the EPA, dispersants’ negative impact, a new climate bill that endorses further off-shore drilling, 19 new off shore drilling licenses since Deep Horizon, etc., etc., on and on. 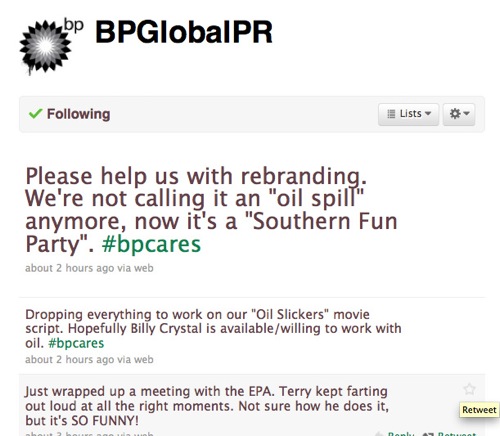 What We Really Believe

Though BP has tried to address these issues, the end result has been public anger, and ridicule rivaling Jon Stewart. One must think Bush era Katrina FEMA officials and Exxon Valdez crisis communicators are relieved to see the grand scale of the Deep Horizon Laurel and Hardyesque bumbling and stumbling.

Unfortunately, the crisis PR probably cannot recover. The chance to save face was lost long ago.

The only thing that can end this is a swift conclusion to the oil spill, and then a much better job from all parties on recovery efforts, now and in the long term. So as Top Kill proceeds, it will surely end one thing — the oil spill — or another — any hope for BP and Obama EPA communicators ending this year on a happy note.

P.S. Generally speaking, the environmental blogosphere’s coverage of Deep Horizon has been apathetic and non existent. It’s been disappointing to have to go to CNN instead of my favorite green blogs for news and opinions. In fact, it’s been a failure in my mind of another kind, and it makes me wonder how serious the U.S. green movement is.

I do want to thank Joe Romm at Climate Progress for standing above the rest and rising to the occasion. Until BP successfully resolves this, we should follow Joe’s footsteps and cover Deep Horizon relentlessly.