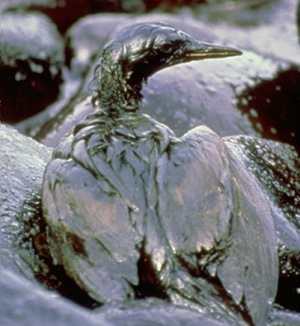 Last winter a movie called Avatar became the world’s top grossing film ever with a plot line that saw a big company waging a war and destroying a world so it could mine a precious resource. Yet when we see the BP oil spill crisis, many people choose not to watch or turn a blind eye to the mass destruction of the Gulf of Mexico marine life. The connection cannot be underestimated, for like Avatar’s world, people and the oceans are interconnected.

When the oceans and related wetlands are irrevocably damaged, we are damaged. Our world becomes less healthy, our domestic ocean fisheries, already slated to be depleted by 2050, will now be barren much sooner, our rain water will have elements of crude oil in them, our beaches will be destroyed. Millions upon millions of marine fish, mammals and birds are being destroyed by this careless atrocity. The long term impact upon us cannot be swept under the rug.

When the above bird becomes slicked with oil, I, too, become drenched with oil. We are interconnected this bird and I, just like we as a society and the dying Gulf of Mexico marine environment are interconnected. We are not seeing the depth of this far reaching problem, now and its long term impact.

That is why I changed my avatar. The oilbird is a testimony to our collective suffering, a reminder that we cannot escape the unmindful actions of BP and the recently awakened Obama Administration (at least we hope). It is a reminder that we must continue to voice our displeasure so that the government serves as a watchdog over BP and the oil industry, rather than its hand maiden.

Lest you think this has already happened, please consider the Obama press conference yesterday. BP flew in clean-up workers for the event, and as soon as the president left, they were dispersed.

BP cannot be trusted, it’s clear the lawyers and PR team are in charge. Whoever is responsible, the long litany of bad acts and spin have proven that BP values its corporate interests over society’s. I feel for BP and EPA employees who must be stunned by actions to date. They more than any need support and forgiveness, as well as encouragement to do the right thing.

Prompt clean-up, damages paid, and much more responsible approaches to societal energy production and consumption are needed. The Gulf of Mexico is an environmental holocaust. It cannot be escaped. But we can change so that it doesn’t happen again. To do that we must not run away from what has happened, and continue to apply pressure to the responsible parties — the Obama Administration, Congressional representatives and BP management.