Only Mindful Action Can Help the Gulf 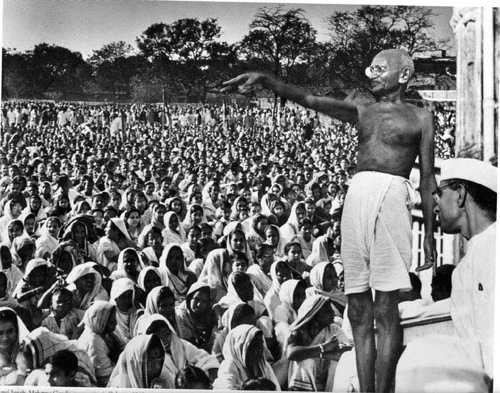 There have been many acts of anger towards BP over the past week, including protests to seize the company’s assets, using apps to create oil spills on browsers viewing stories mentioning BP, and efforts to tarnish the company’s logo. It’s totally understandable. Punishing this company for its clear and continuing wrongs relieves a very human need.

Yet, such acts fail to help the Gulf marine environment, suffering wildlife, and the many fisherman and local businesses getting decimated by the Deep Horizon catastrophe. Only mindful actions and protests can successfully and positively benefit those people that need us the most.

One of the greatest heroes of all time — Mohandas Ghandi — demonstrated that you can topple an empire by taking spiritually grounded mindful political action. It seems paramount to remember Ghandi’s lessons as we move through this crisis.

Seizing BP’s assets strikes me as the exact wrong thing to do. The company needs to remain viable so it can actually pay for the reparations it owes.

Further, as a moderate Democrat it’s been easy to laugh at cries from extreme elements about a socialist administration. That’s because it’s clear that these elements possess a great ignorance about what socialism and Marxism actually are. But a government seizing a company’s assets meets the text book definition of socialization. That kind of action will not benefit anyone, in my opinion. The U.S. government can’t effectively regulate the oil industry much less run an oil company.

BP (as well as Haliburton and Transocean) must be held accountable. I totally agree with this logic. But the situation remains more complicated. As this New York Times article demonstrates, the Obama Administration — specifically MMS — had many missteps that enabled the poor infrastructure that caused the oil well failure and ensuing catastrophe. Further, the oil industry regularly causes these types of incidents in other, less modernized parts of the world frequently!

Protests against the Obama Administration’s questionable relationship with BP and shoddy first five weeks of Deep Horizon oversight have yielded results. Witness President Obama’s remarks on Friday: “”What I don’t want to hear is, when they’re spending that kind of money on their shareholders and spending that kind of money on TV advertising, that they’re nickel and diming fishermen or small business owners here in the Gulf who are having a hard time.” As BP’s behavior and PR machine demonstrates, this oversight will continue to be needed, and that means citizens need to keep the pressure on both BP and the Obama Administration.

From an action standpoint, there have been a variety of organizations that have assembled volunteer efforts, from their action from afar via computer to on-site action. Here are three articles to consider:

Whatever you decide to do, please be mindful. Remember Gandhi’s lessons. Ask yourself does it help the Gulf and those affected? Does it improve the government or industry so it doesn’t happen again? Will it help the environment?

Also see Jennifer Windrum’s How You Can Truly Help the Gulf Now.