Much has been made about BP’s questionable advertising campaign, from President Obama’s call out of the $50 million expenditure to ethical questions and search engine placements. Experiencing this inappropriate overspend on Facebook has been quite troublesome.

The above ad was served to me over Memorial Day weekend on Facebook. It clearly demonstrated that while Facebook is using my posts and links as a means to serve me ads, it doesn’t work. The ad features BP, a company I have been blogging negatively about for several weeks, and one of my local friendly competitors John Bell, head of Ogilvy 360 DC. John’s a good guy, but that isn’t going to sway me to support BP. Thus, Facebook privacy violations or not, the ad tech wasn’t smart enough to really work. 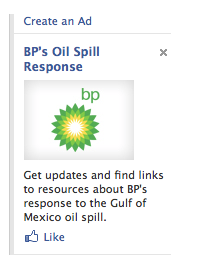 My reaction, I clicked the ad to go away. When prompted for my reasons, I clicked on the offensive choice. Fast forward 10 days and I have been served the BP ad or a variant of it almost a dozen times. No matter how many times I click “offensive” or “misleading” the ad keeps coming back.

Facebook’s continuing disregard for its members is clear. And it makes me feel zero loyalty to the organization. AOL once thought it was undefeatable, but technologies and the Internet change. We know there’s no respect for privacy here, but if Facebook’s ad tech can’t even respect a user’s request, when a better, free solution comes movements will happen.

As to BP: No one believes this company any more. The spin has become too much. From what we were led to believe — the world’s most progressive energy company — to the factual reality, the world’s most irresponsible oil manufacturer; everyone sees a company shooting out hot air.

You can’t buy trust, especially once trust has been violated. The only way out of this for BP, again, is to fix the well, clean up the environment, take care of the damaged Gulf economy, and simply report progress using PR and social media sites. Aggressive claims of being moral and right will fall on deaf ears. Yet another communications gaffe for BP.