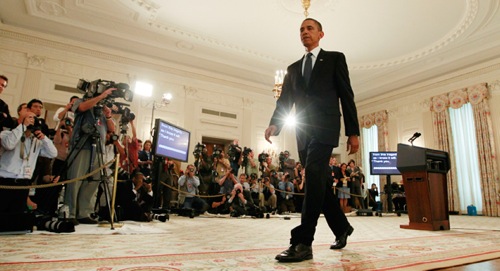 Yesterday’s news about the $20 million escrow fund sparked a debate about Obama’s consistent use of power on behalf of the public interest against large corporations (AP Photo). It’s an interesting conversation, and it’s ironic to watch the GOP, the party of Teddy Roosevelt — a.k.a. the Trust Buster — object to this action. But for me, while this may be a GOP mud flinging point, there are really three big $20 million takeaways from a PR perspective.

1) Obama is the big winner. For once, we are debating about whether or not our vulcan-like leader went too far in protecting the Gulf’s interests. Isn’t that refreshing?

2) BP gets points, too. By acquiescing, BP demonstrated in a very real way that when held to the flame, the company is willing to go to any length to set things right. Because it’s escrow if the full $20 billion isn’t used, BP gets the remaining money back. Further, it’s a commitment to pay money over time (as opposed to a lump sum), and it demonstrates to investors a finite penalty. Pay your dividends, BP!

3) The GOP loses. The GOP does have a point to make in its stance against reactionary policy during this crisis. This battle is best fought in the restructuring of energy policy and MMS. Defending BP’s “poor interests” was a mistake. Even the rest of the oil industry has thrown BP under the bus, and the GOP would have been wise to let BP serve as a sacrificial lamb.

Why? This is not your average big company abuse. This is the worst environmental crisis of our time. It’s an extraordinary situation. By criticizing something that BP voluntarily agreed to, the GOP makes itself — in particular Joe Barton — look insensitive. Choose your battles, folks.

What do you think about the $20 billion escrow?