The Disaster Known As Obama Response 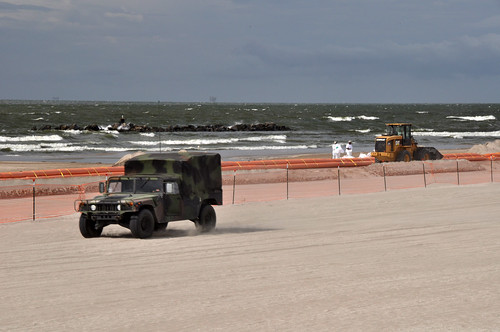 With his boot firmly placed on BP’s $20 billion neck, we’ve not heard much from President Obama or the federal government about the oil spill. Perhaps contented with their villain, the White House lets Thad Allen run the show while U.S. media interest in the oil spill statistically wanes. Yet, the situation continues to worsen for the economically stricken Gulf states.

One of the most interesting changes in my opinion resulting from last week’s citizengulf trip was my view of the Obama response. I left contented, I returned utterly dismayed.

The Obama Administration has made life difficult for locals, while not engaging enough to make difference. The list of continuing woes is staggering: First Amendment violations, not forcing clean-ups from BP, a failure to streamline claims processes, continued ethical violations, a local government’s decision to allow children to swim in tar infested waters, lack of transparency about water toxin levels, etc.

What the Obama administration has successfully done is position culpability. It has failed to help suffering American citizens, from fishermen to yes, gas station owners throughout the Gulf. The Obama Administration clearly does not have its hands around the oil spill disaster.

Whether it’s declaring a federal disaster to assume the powers necessary or changing internal “rules,” the Obama Administration needs to step up its response. We don’t want a PR response, we want results. Stop blaming BP, start helping people.