The Long Tail of Media Grows 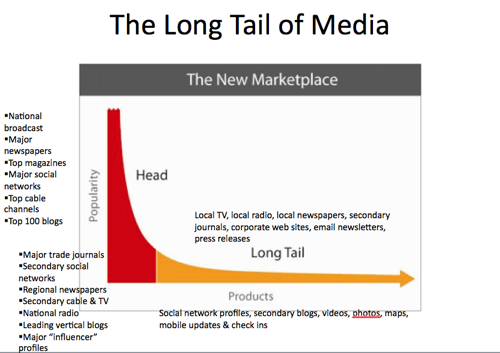 When I wrote Now Is Gone, Long Tail theory was prevalent throughout social media conversations. Applied, WIRED Executive Editor Chris Anderson’s economic theory did a great job of visualizing the ascent of new media forms in context with old traditional media. Since that time, social networks and mobile media postings have arisen to assert their place within the world of media.

Just to recap what Long Tail theory that with a large population of customers the selection and buying pattern results in a power law distribution curve (Pareto distribution). A market with a high freedom of choice will create a certain degree of inequality by favoring the upper 20% of the items (“hits” or “head”) against the other 80% (“non-hits” or “long tail”).

Head of the Tail

Let’s go back to the power curve for media now that the dust has settled with the ascendancy of some new media forms. The above chart plots the effectiveness or the weight of various media tactics in the current 2010 media environment.

Red hits have the most impact (top 20%), while the long tail (yellow, 80% of media) still makes up the majority of the media marketplace. This chart defines the marketplace as word of mouth power and readership.

Like my original chart three years ago, this is subjective and various earned media forms have disparate degrees of weight. General classification is the best we can do without the correct measurement tools using a real world full on case-study with all types of earned media opportunities. Further, this assumes PR owns social media within a company. As we know, social media is often divided amongst the larger marketing department.

As you can see at the head of the tail we have the following media forms:

The Turning Point and the Tail

At the turning point in the tail, roughly the 20 percent mark, you have several other forms of traditional media, which reflects the fall of some media, and the rise of new online and mobile media.

Major trade journals – Obviously, the powerhouse in any industry still holds sway, but the secondary journals have suffered quite a bit

Secondary social networks – For every FourSquare, there’s a Gowalla, not as popular, these secondary networks still drive tons of traffic

Regional newspapers: You don’t hear about the Denver Post much nationally. Still very powerful in the Rock Mountain region.

Leading vertical blogs: And the winner here, no question. In PR for example, Brian Solis (who wrote Engage, and the intro to Now Is Gone), will get as many or more reads as a Secondary PR journal.

Major “influencer” profiles: Finally on some of the social networks, you have highly “influential” profiles which either through mass followers or strong engagement can set of tidal wives of action via their profile


After that, you have the long tail, the vast majority of content. From the old world, I think you can list the following: Local TV, local radio, local newspapers, secondary journals, corporate web sites, email newsletters, and press releases. From the newer social media world, you can list: Social network profiles, secondary blogs, videos, photos, maps, and mobile updates & check ins.

The issue with this chart is the taxonomy, which seeks to isolate individual media forms and tools and their weight. In reality — given today’s fractured media environment — one hit in any of these areas can trigger successive hits in others. When a word of mouth campaign has actual substance it usually cascades. Smart communicators understand this. That’s why integrated outreach — not just social media or traditional PR & advertising — matters so much.

In Chapter Four of Now Is Gone, we talk about this “ping pong match” between traditional and new media outlets. From the draft material in June of 2007:

Ping pong matches demonstrate that weighting one tool by its actual total community and eyeball impact fails. As Seth Godin said in Meatball Sundae, “It doesn’t matter if the socially generated earned media only gets one percent of the hoped for attention if it’s the right one percent.”