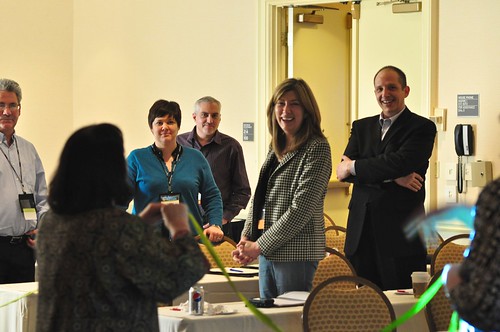 Relinquishing control let’s an organization achieve a marketing sweet spot in social network communications. Specifically, by opening the brand to an extended enterprise, stakeholders are empowered to drive conversations. Ultimately, word of mouth in social networks really works when others talk about the organization, not the company or nonprofit itself.

Many social networks serve as outposts for organizations. They have identified their community is having discussions in these locations (or because they have shiny object syndrome). Organizations want to create calls-to-action and encourage people to visit their site and become part of their core community.

That means empowerment must occur. The Fifth Estate wants to be recognized as important. In reality, content creators in social environments feel strong enough to express themselves independently as members of an online community. They are not likely to stop just because a company or an organization wants to control the social conversation. In fact, such an effort will likely create a damaged brand reputation a la Wal-Mart after it participated in several public astroturfing (the practice of undisclosed fake or inauthentic representation in public media) scandals.

Content needs to be less focused on ensuring messaging control, and evolve to offering a provocative conversational contribution to the community. Response to complaints need to be factual and timely. Embracing the uncontrolled expression of and feedback about the organization’s initiatives — incorrect, fuzzy, negative, outlandishly fanatic, or even minimal — represents the ultimate statement in community empowerment.

My favorite example of this is the phenomenon known as Lady Gaga. Lady Gaga has achieved incredible social marketing results, including the most viewed video ever on YouTube. She gave her fans a name, Little Monsters, and made them bigger than her, creating a larger ecosystem. They share symbols, and her content, too, often imitating her videos and images online without fear of repercussions. Finally, Lady Gaga uses these tools to make her customers feel like they are rock stars, too, highlighting them generally, and also on occasion, individually. She is a master of empowerment.

While a bit of an oyxmoron, the social Customer Relations Management (sCRM) trend understands the fundamental aspect that people feel free enough to express themselves online. They expect organizations to be present and respond.

On the nonprofit side, over a series of disasters the American Red Cross has fielded numerous tweets, status updates and text messages from people in need of aid. The organization is actively analyzing how to grow its already significant social media process to embrace this new form of social disaster communication (full disclosure: ARC is a current client).

The ability to create a loyal customer base or social movement revolves around the understanding that people talk about issues and needs outside of the entity. So let them! In fact, encourage them through technology and policy.

From a technology perspective, there’s much an organization can do to embrace “shareability.” Specifically, there are great software plug-ins like AddThis!, ShareThis, TweetMeme, FaceBook OpenGraph (Like), that lets anyone port content just about anywhere.

OpenGraph’s ease of shareability has literally empowered Facebook to separate itself from the pack, rapidly becoming the dominant social network of the new decade. In fact, the social network now rivals Google for the top spot.

From a policy and approach standpoint, shareability means highlighting customer and volunteer stories. It may even mean taking a customer complaint or issue and acknowledging it on the main site. But the general ethos should be empowering stakeholders, and making them feel good for becoming a part of your core community. That builds loyalty and movements, and makes people feel good about associating themselves with your brand.