These survey results are being released in conjunction with the CitizenGulf events held on Wednesday, August 25 this week. The benefit meet-ups seek to help fishing families affected by the oil spill with education programs. Register today. 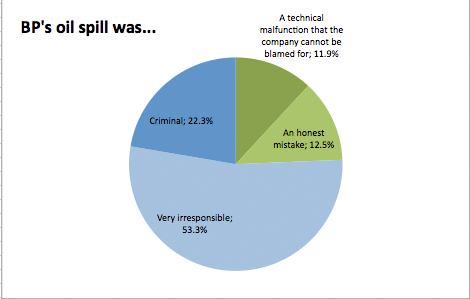 As part of its efforts to sway American opinion about its responsible approach towards the Deep Horizon oil spill clean-up, BP engaged in a significant advertising campaign, with major online components including social media properties and search engine buys. Ogilvy 360 was brought on to help with the effort. So nearly three months later and four months after the spill how are those efforts working out for BP?

Not so well as a MyType survey reveals. Seventy five percent of all Facebook respondents thought BP was either very irresponsible or criminal in its actions.

The survey was conducted during the past week of 3,000 US Facebook respondents, normalized to the general US population.  Survey respondents were offered one open ended statement, “BP’s oil spill was…,” and offered four answers:

When you look under the covers, the survey shows at best some mixed results that are very polarized by children, age, income and environmental. All of the results are statistically significant. Here’s an analysis:

One and thee children families had similar results as two kid families, but large families skewed the other way with 25% thinking BP was not to blame, and another 25% believing the company made an honest mistake.

The Older Are Less Forgiving 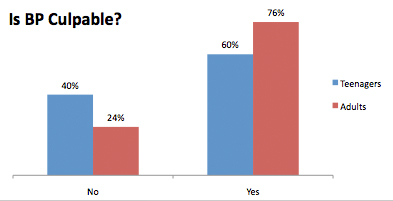 Older Facebook users were much less forgiving of BP than teenagers. No where was this more pronounced that those aged 40-49 years old, who did not believe BP was innocent. Fifty six percent of this demographic found BP very irresponsible and 23% said the company was criminal. Teens on the other hand felt differently, with 51% believing the company was very irresponsible, and only 8% criminal. Twenty three percent of teens thought BP made an honest mistake.

Forty one percent of true environmentalists though BP was criminal in its actions, but more telling was the group who identify with green issues as very important — or green consumers. Twenty two percent thought BP was criminal in its actions, while another 60% thought the company was very irresponsible. Those who feel the environment is not very important had a 42% very irresponsible ratio, and only 5% criminal.

There were great variances in race, particularly when in came to designating BP as criminal in its actions. Twenty four percent of hispanic respondents thought BP was criminal, compared to 19% of caucasian, 18% of African Americans, 12% of East Asians, and an astoundingly low 7% of Middle Easterners. This may be attributed to the heavy reliance of the Middle Eastern economies on oil production.

One of the cool things about MyType is its psychological profiles. While I just analyzed traditional demographic break-outs, MyType can show those inclined towards Power or Imagination. The respondents’ psychological profiles reveal intriguing insights into how personality shapes our perspective towards BP.

“Those who highly value power, for instance, are nearly 5 times more likely than others to choose the “technical malfunction” answer, assigning absolutely no blame to BP,” said Tim Koelkebeck, founder and CEO of MyType.  “Intellectuals, too, are 36% more likely to choose either that answer or the “honest mistake” response.  But others are much less forgiving.

You can contact MyType for the full survey results via email info [at] mytype.com.