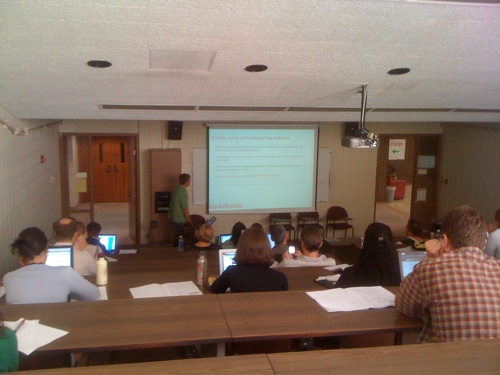 This is the fourth session from Ted Fickes, a #ZTraining on Twitter given to the Colorado Nonprofit Association.

Lots of basic stats about Twitter – 35 million U.S. users in June, 93 million worldwide. 5% are female and 69% are caucasian. Far higher use by African American and Hispanic use. The site grew by 109 percent year over year from June 2009-2010.

Ted says the trick is to find, be found by, and interact with key audiences. Strong Twitter users are influential in the field. And search results matter. So for example, the #ztrain hashtag will make this event more searchable in Google.

Great advice: Don’t worry about appealing to everyone. Instead focus on the issues that matter to you. Share a common interest and dialogue as it will likely put you together with more influentials. Influentials, care more, write more and tweet more. Bloggers, writes and journalists are included in this group. Ted says following people back critical for growth, and to thank people for the follow (but don’t auto message them).

Search is an underpinning of following, retweeting, replies. Searches help you do the things that matter on important topics. An end result of Twitter online is search in other places. Oneforty.com is a great place to find Twitter tools and applications to help with search.

Retweeting on Twitter is important, but many people prefer to use applications like HootSuite for more functionality. Write to be retweeted. 120 characters gets it done. Remember tweets are meant for someone. Speak t people, reply, use DMs, have conversations.

Adding connectivity via Twitter profiles to your site is critical for connections. You can customize your twitter profile to show staff on your profile page. TweetyGotBack is a tool for creating Twitter backgrounds.

Integrating it to Facebook is doable. Some feel it’s not advisable. Many screen the types of Tweets that go through. It’s really a hard place to do fundraising.