Per last week’s post, the CitizenGulf Day of Action some good numbers and created a mindful way for people to take action in the face of the oil spill. As the entire process was largely open sourced, I’d like to share my analysis of the marketing experience, too. It is my hope that by sharing this information, other individuals and non-profits that are considering developing events can garner best practices for their own efforts.

The value of participating as a volunteer in #CitizenGulf was threefold:

We met the first two objectives fairly well. By my estimate, we got at least 1000 people to take actions online or in person, and helped at least eight kids get into the After School Assembly program with $10,000 in funds raised (final tallies from Citizen Effect pending).

There are a couple of general themes that are important to note. Initially, we had larger fundraising expectations, but several challenges arose — namely BP’s role in and responsibility for the disaster, and timing — that made it clear this wasn’t going to happen as early as August 4th.

The Issue: As angry as people were, the oil spill was an issue they felt BP should handle, and if not, then the Obama Administration. It was very hard getting people to act and support this issue, especially with the dying media attention, and BP claims that the oil was gone.

Others felt the fishermen didn’t deserve a break. In the Gulf, one event organizer was encouraged not to have an event because it would hurt local tourism business. Add in the horrible disaster that occurred in Pakistan, and this effort became a very tough sell. This effort moved to become much more of an education initiative for the public.

Timing: We put the events together, from beginning to end in five weeks and two days. The actual events opened on August 1, with a 24 day ramp. This shows tremendous activism can occur using social tools in a quick timeline, if need warrants.

In this case with the oil spill rapidly leaving the national media and the minds of U.S. citizens and with the anniversary of Hurricane Katrina on August 28th, we felt that the window of action was a limited one.

Timing also worked against us. August is a slow month, and organizers only had weeks to get the word out. I am sure we lost some cities because of this. It also put enormous strain on the national effort. Mistakes happened as a result. I believe in the cause enough to do this and have no regrets, but I will think three times before doing a series of meet-ups with so little time. Six months would be ideal.

Overall It Was a Success 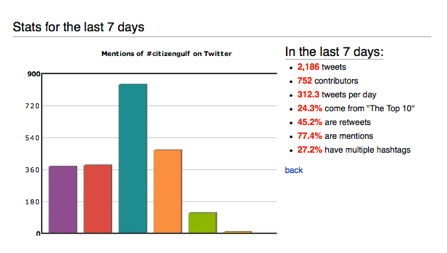 In my mind, the effort was a success, primarily because enough local leaders really ran with this, and so many people took action. The effort succeeded because most of us involved in organizing events kept going no matter what. People showed their true characters, and the success of CitizenGulf was a collective win as a result. To honor those who worked hard, and made a big difference with little steps, I’d like to offer the positives before the challenges.

Citizen Philanthropy: This effort was an initiative based in empowering citizens to act, and they did. Given the nature of the oil spill, providing mindful action for concerned citizens was a challenge, and one we felt compelled to offer after our fact finding mission. Clearly, as tough as an issue as it was, others felt the same. The 1000 plus people who took action, and 400 plus who donated are the big winners.

Social Media Works: We had no budget, and no paid staff other than the time that Citizen Effect dedicated to the effort. Everyone else volunteered, and all the tools and design were provided for free. The whole effort was done on a shoe string, and was possible because free social tools empower activism.

Crowdsourcing on a National Level: We took a hands-off approach to local events encouraging people to become creative and make the events their own. The Tar Ball took off in Houston and DC had a date auction. In North Carolina, Rob Blackwell created a song! DC’s Jess3 contributed an EventBrite landing page. Chicago and LA had concerts, and New York featured a movie. It was awesome to see the creativity!

Citizen Journalism: The citizen journalism last June was an incredible success, driving incredible awareness about the plight of the fishing families, prompting people to ask us what was next, and if they could get involved. I wouldn’t hesitate to do this again as a means of open research, sharing knowledge and driving interest.

New Relationships: Whenever you do something like that involves mass action and face-to-face interaction, you create all sorts of new relationships for others as well as yourself. I think anyone who invested serious time in CitizenGulf is already seeing the intangible benefits this week in their online networks.

Believing: Sometimes when something as bad as the oil spill occurs, the lying, the malfeasance, and the inept governance that oversaw the effort, people stop believing. Ironically, Obama’s campaign promise of, “Yes, We Can,” while it may not hold true for his administration, did come true for CitizenGulf. I think most people believe that even with a simple registration or even a tweet they made a difference. And for eight kids they did. It’s important that people see this and know it, because believing your actions matter is the antithesis of the growing lack of empathy we are seeing in society today. 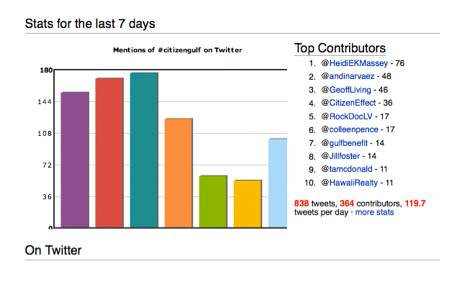 Some of the challenges were external and beyond our control, and some were internal and provide an opportunity for learning. As one of the public leadership points of contact for CitizenGulf, and arguably the most visible, I want to state now that these are my opinions, and also from my standpoint, the internal challenges are my responsibility. I share these simply to offer lessons learned for staging events of this magnitude.

Crowdsourcing on the Executive Level: We put together a dream team of volunteers to lead the effort on the fly. Yet, at times this was hard for all parties.

Because the effort was discussed orally, and expectations were not put in writing so everyone understood their roles, we had some branding and promotion issues that made CitizenGulf less visible than it could have been. Also, this lack of clarity caused our effort to become more complicated than necessary, and I received feedback from local organizers that they did not understand calls-to-action, etc. Again, I see these errors as my fault, and I apologize for any problems this caused.

With a group managed movement like this, Memorandums of Understanding should be deployed so that everything is in writing and roles clearly defined. It also may be worthwhile to have a smaller team, with clearer executive roles.

The Local Cause: Because we picked a charity that only worked within eight parishes of Louisiana and because it was religious, we had some more explaining to do. Our fact finding mission showed that Catholic Charities of New Orleans was doing the most work with fishermen, but I think it was a stretch for some people, and it could have been better explained.

Pepsi Refresh: As part of putting together the dream team, we added a Pepsi Refresh contest to the calls-to-action. But the contest entry did not read like a CitizenGulf effort, and didn’t integrate well. Plus an ensuing controversy the week the contest opened about Pepsi Refresh’s Gulf initiative pretty much submarined this call to action right out of the gates.

Posterous: Posterous was generally a good blogging platform, but had significant DNS attacks the week of the event launch which stymied momentum. Posterous does not currently let you use its code on your own server. If we had made the decision to use WordPress on our own server, we would not have had such an issue. We had 18 business days to market the event and lost roughly two to Posterous issues. As you can see, relying on a platform outside of your control can have its downside.

As you can see there were more positives than negatives, and because of the outstanding way some local leaders took on the crowdsourcing challenge, a successful movement was built in a short period of time. Most importantly, people were provided with and took up mindful actions to build a positive result in the wake of BP and the Obama Administration’s combined mismanagement of the oil spill disaster.

As a whole, I see fundraising via social media as a secondary result, not a primary goal (See May interview where I stated this). For the amount of time spent, there are better primary ways to raise money. Movements like this are better for education, and to empower citizen philanthropists to act. That being said, we still helped out eight to ten children this year, and that’s a very powerful statement.

Personally, I feel like I could easily replicate and improve the citizengulf movement building process. If I had a budget and more lead time, the results would be extremely potent in comparison. The #citizengulf experience was invaluable in that sense.

Finally, I have so much more respect for Amanda Rose and the incredible job she did with Twestival. To do this three times with the level of success she has had is simply astounding.

Thank you to everyone who participated. I think we made the interwebs a better place this Summer with the CitizenGulf initiative and we made a real difference for children who were impacted by this disaster.

Citizen Effect will continue the CitizenGulf Project. You can create your own initiative to benefit Gulf kids, or you can still give if you’d like. Here’s the donation page.