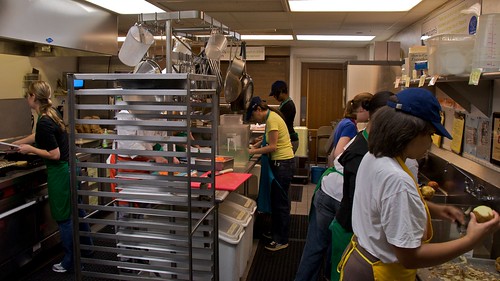 The above photo was taken during a shift last summer at Miriam’s Kitchen.

I first encountered the Miriam’s Kitchen team during the summer of 2009 when the DC organizing committee selected the Kitchen as its charity of choice for the second Twestival. At the time, we felt they would make the most from the exposure, and I think we sold them short. Their ability to grasp online social relationships and extend them to real life actions has been outstanding. It’s an honor to feature Miriam’s Kitchen as a case study.

Miriam’s Kitchen decided to participate in online media because many of their supporters were using social media. It’s important that we meet our supporters where they are, and social media helps us accomplish this. Many of the Washington, DC residents that donate and volunteer fall within the 25-40 age range, and are social media/web savvy.

We also connect with some of our homeless guest”s through social media,” said Jennifer Roccanti, Development Associate and Miriam Kitchen’s primary voice on the web. “While interactions online are rare, a few of our guests have posted messages to us on our Facebook page, and some of them have started using Twitter. We recently heard from our Case Managers that a few guests check our Facebook page for the daily menu before they decide whether or not to make the couple-mile trek to Miriam’s Kitchen each day. That’s a lot of pressure on our social media team.”

Like many nonprofits, Miriam’s Kitchen doesn’t have many resources and most people partake in multiple jobs. The 501c3 uses Twitter and Facebook primarily (with a dash of YouTube) as part of a larger communications strategy. The Kitchen provides daily updates on these sites, specifically what it is serving that day, while encouraging local community members to participate via recognition and interaction.

The organization has successfully engaged many of DC’s most influential digital voices. From the AARP social media team to Chris Abraham, these voices celebrate being a part of the extended Miriams Kitchen family with public declarations of support.

The Kitchen also receives tremendous support from people across the country who have found us through online channels, an unintended benefit of its social communications. “We’ve connected with people we wouldn’t have otherwise, and amazing things have happened because of those connections,” says Roccanti.

“The measurable outcome we are most concerned with right now is deepening relationships with our supporters,” Roccanti added. “It’s been a challenge to measure that outcome, but some indicators of our success include raising more money than ever in 2009, raising more money online than ever before in 2009, and raising $10,000 through the Washington, DC Twestival in 2009.”

The Kitchen also points towards anecdotal evidence of deepened relationships through the use of social media. Whether it be through volunteers becoming more engaged, donors seeing the impact of their donations and then increasing their gift, or guests feeling part of our online community–social media has brought Miriam’s Kitchen countless benefits in the past two years.