Evolving with an Independent Fifth Estate 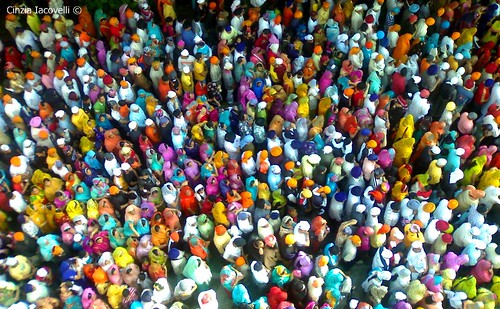 Organizations can experience success within their social communities, and feel like they have arrived (colors image by cjnzja). They have mastered the crowd. Given how difficult building a community can be, it’s easy to fall into this trap.

Consider how Nokia built the very successful Mosh social community for third party phone platform development. Then Mosh became a community for the phone company’s online store and the excitement died down quickly.

People — including those that comprise the vociferous Fifth Estate — are complex. No one person has a singular area of interest in a particular subject matter. People like or don’t like the arts, sports, civic activity, working, parenting, family, etc., etc. To assume that as an organization we can capture their interest and own it is, well, short sighted at best.

In reality, the Fifth Estate may become aligned with an organization for a period of time, then they move on. As Charlene Li and Josh Bernoff noted in their book Groundswell, the community’s support can rise and fall with the moment. Engaging interested Fifth Estate members in a conversation about a cause or a company’s products & services over a long period of time is extraordinarily difficult.

The summer of 2010 saw a viral success with the Old Spice Guy, a series of advertisements mixed with social media that featured a shirtless buff actor making witty quips about manliness towards ladies. The Internet was awash in buzz and discussion with people eager to get a response from the Old Spice guy in video or on Twitter. By the autumn, the buzz started dying down as the concept aged and then Old Spice switched the ad campaign targeted towards men with football spokespersons.

In the U.S. cause space, more than 2.5 million charities compete for volunteers. According to the National Conference on Citizenship, 62 million Americans volunteered with a nonprofit between 2007 and 2009. Yet, 18.6 million people took action with their neighbors independent of a 501c3 to fix a community problem (29% of the larger 501c3 volunteer base). Even with an overcrowded nonprofit sector, causes cannot convince a great majority of Americans to seek out and/or stay with them as their volunteering vehicle.

In the 2009 movie, George Clooney as Ryan Bingham said, “There’s nothing cheap about loyalty.” Building and then keeping a community engaged requires dedication, a commitment to serve, with an eye on moving with the community’s interests. There’s no better example than online communities that sustain interest over years of time, and even more impressive are those that crowdsource for sustained periods of time.