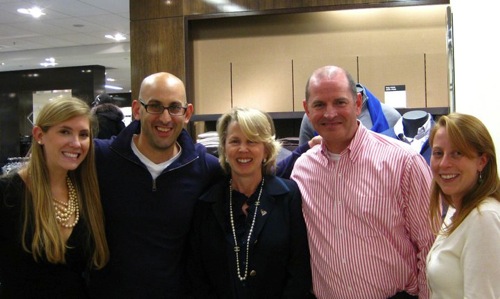 I had the pleasure of being one of the guest models at last week’s Geek to Chic fundraising event. The next morning event photographer Moshe Zusman tagged me on Facebook with a great watermarked photo from my spin down the catwalk. I cropped it and used it as my profile pic.

Within hours I was told I needed to use a watermarked version of the photo or pull it down. In essence, by using the watermarked image, I would be using my social profile image to promote Mr. Zusman’s photography business. I took down the image because my social profiles are not Mr. Zusman’s advertising space. Instead I have used the above photo which was issued later by Vithaya Photography — also watermarked — but used with permission sans the Vithaya brand mark.

At the heart of the issue is a photographer’s legal rights to their intellectual property versus the shareability norms of the social media world. In today’s digital media environment, images, content and ideas are shared with creative commons credit, links — and some times with no attribution.

For me, it was acceptable to use the photo for a profile pic. There were many reasons for this including serving as a featured guest who helped market the event and gave my time for free; as a professional blogger; because the photographer was hired by friend and organizer Mark Drapeau for the affair; and finally, as I was tagged in Facebook of all places, the most portable of all image networks. 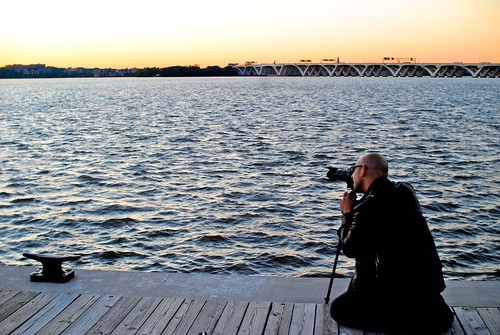 Capture by Joanne Marder (my sister)

When I complained about the contracted photographer’s enforcement on my Facebook profile to Mark, he did follow up with Mr. Zusman. The photographer decided not to invoice Mark’s company Microsoft for the effort, making himself a guest and not a contracted employee. He then rumbled directly to me about legal rights.

Ultimately, legal rights aside, there are a couple of big social errors that businesses, nonprofits and photographers alike can learn from:

1) Taking photos of bloggers without their permission, tagging them on Facebook with the images, and then demanding they use watermarked versions of the images in any personal use is a HUGE faux paus. Really, if you don’t want your images used and shared freely, why would you put them on Facebook of all places and tag bloggers (Flickr and its Creative Commons licenses offers a much better place for protection)? Most top and mid-tier bloggers are not going to promote a watermarked image, basically an ad for the photographer.

2) It’s never wise to put one’s personal interests ahead of a client’s best interests. I’m a friend of Mark’s and I know this was not his intent, rather an act of an overzealous photographer who doesn’t get social media. If it was someone else, the behavior could have been misinterpreted and Mark’s company Microsoft could be getting plastered with negative posts from angry bloggers. This would have been a tragedy. Mark and Microsoft both deserve great credit for their CSR program Geek2Chic.

I did ask Mark for his opinion on the matter…

“Obviously, the person who owns intellectual property is free to use it as they want and set rules for how others can use it,” said Mark Drapeau.  “However, as with other creative pursuits like music and video, people in ‘the audience’ frequently want to share and use photographic content.  Thus, strict rules for use of it restrict how people can share it.  Generally, I think that the different variations on Creative Commons licenses have done a lot to protect creative content owners, yet also modernize how the content is treated in order to promote the creativity of the audience, too.”

Vithaya also indicated to me he usually doesn’t give his images away without watermarks UNLESS he knows where they are going and how they will be used. However, he did see the value of letting a blogger have the image, and as a result his photograph is my current profile pic.

Unfortunately for Mr. Zusman, while he is talented, he will increasingly face competition from new photographers that are just as talented and have a better understanding of social media. Consider ace photographer Kris Krug, who plays the social game and uses his artistic imagery to support industry events like TEDx Oil Spill — sans watermark. Krug has a fantastic international reputation as a result.

The Krugs and Vitnayas of the world will win more digital business in the future. They better understand the dynamics at play.

In an era where more and more people will engage bloggers and online influencers as part of their communications effort, photographers like Mr. Zusman will have a hard time enforcing digital rights. Clients won’t gladly suffer watermark demands for big events just as someone wouldn’t tolerate them on their wedding photos.

If attending events and tagging people with photos is a way to get a photographer’s business marketed on Facebook, one would be advised to consider the event! New media power users have many photos uploaded featuring their likeness. It’s easy to find not just passable portrait shots, but very good ones, too. For example, I’ve seen five different photographers shots of me from Geek2Chic, and I know there are more coming.

All things considered, photographers that want social media-oriented business need to lighten up on their legal enforcement. Otherwise they won’t receive recommendations and new business. Or worse, they’ll get negative posts written about them like this one.

This is the issue of our time — not just for photography — but all forms of creativity. The music industry has been ravaged and then reinvented because of digital copyright enforcement (see Madonna vs. Lady Gaga case study). Newspapers have been ravaged, and in some cases forced to shutter their doors thanks to digital classifieds and top tier blogs. The book publishing industry is now facing the dramatic change of digital (albeit somewhat more gracefully) thanks to tablets and readers.

The world is going digital. Change is certain, the question remains whether content creators will successfully adapt.