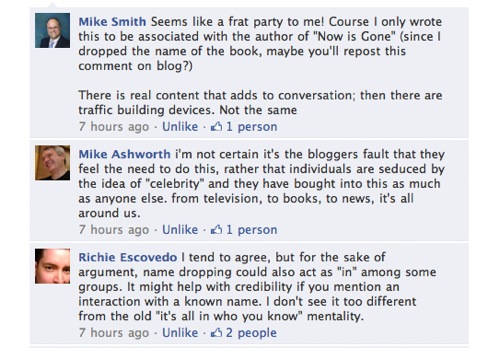 Tell me someone on the social web who doesn’t name drop. The whole currency of the social web lies in referencing and mentioning people by name. Name dropping builds perceived value and equity. It’s at the heart of today’s influence measures right or wrong (see write up of Klout), and drives “weblebrity.” So we should look at it.

Is simply associating yourself with someone — even if it’s a fly by — an accurate measure of ability? I think even posing this question is absurd, but it seems to be the way of things right now. People go to conferences, tag each other and check-in with posts, mention casual lunches, and even business deals. Some do it with sincerity (happy to see you!), and some do it in an effort to gain street cred. (I just checked in at Facebook HQ!). 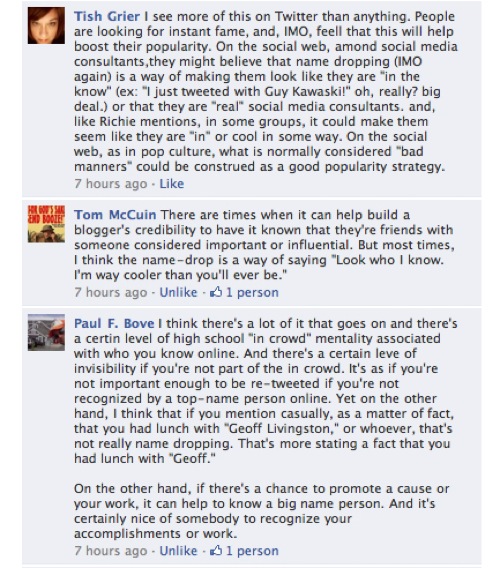 Let’s be clear, just because you see someone associated with another via a tag or a reference, doesn’t mean there’s a relationship. Nor does it mean that the person who does it should receive credibility. Just because a post is retweeted 20 times doesn’t mean it’s been read or that the ideas are valid (I can back this with data).

When I was on a vacation a year and a half ago, a Twitter follower spotted me at JFK airport between legs of a flight. A brief, pleasant interchange occurred. The tweet was up in five minutes. My wife was mortified! 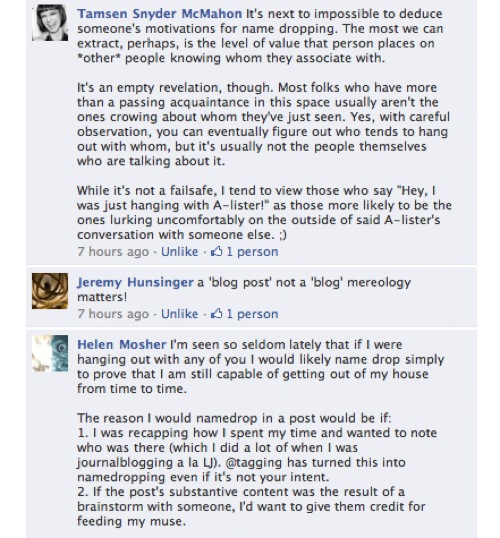 Anyone who has attended SxSW knows this event takes name dropping to epic proportions. I personally dread seeing my name come across the Twitter stream. I can’t imagine what it’s like to be a real famous person like Mark Zuckerberg at such an event. Really, SxSW embodies all that is wrong with the social web culture, from frat boy parties to vanity contests for the most name drops. At the same time, it is such a powerful networking opportunity, one would be a fool not to go and talk to people in person.

To me there’s no way to resolve the name dropping issue. It’s so hardwired into everything we do online. Perhaps, in parallel to old school name dropping, to not ever tag anyone would simply mean to live in an online hermitage.

At the same time, I think personally we should devalue name references as a valid measure of influence and stance. At the minimum, I hope after reading this post we’ll take conference tweets and casual mentions with a lot less excitement. And casually mention people with a lot less frequency.

P.S. To be clear, the JFK incident was a rare one. When I walk around in my home town of Alexandria, Virgina — a very blue blooded city — I am sure almost no one wonders who that nerdherder living on the wrong side of the tracks is. They are much more interested to see if the Ragin’ Cajun is in town for a real celebrity citing.