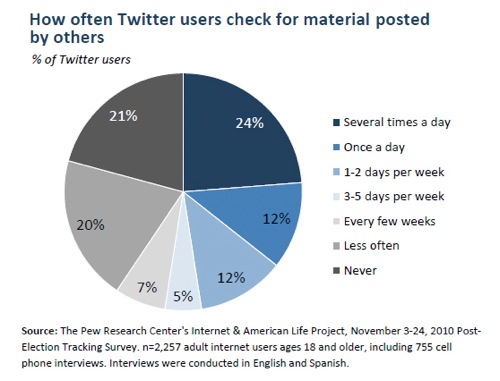 They say that life is like peeling an onion. Every time you think you understand it, a new layer is peeled, revealing more about the onion. Recently two separate documents — the Pew/Internet study on Twitter and an Ad Age article on Twitter trends — shed new light on the social network and its use. While the Pew report was well discussed, there were a couple of critical points which were overlooked. Here are three takeaways from the two studies:

1) Approximately 1/2 of Twitter isn’t listening. Consider the above chart from Pew. A whopping 48% of Twitter users don’t check other users’ updates frequently (at best every few weeks).

That means a lot of accounts broadcast without two way dialog. Twitter dubs itself as an information service, but if no one checks then information is not getting spread as far as one would be led to believe. This amazing stat blows a hole into a lot of metrics purported by marketers claiming reach on Twitter. It’s likely these are the same marketers who create corporate accounts that broadcast tweets on accounts with little engagement…

2) People care less about celebrities on Twitter than one would think. So much has been made about Twitter and the mega-accounts created by Hollywood types with millions of followers (in spite of their zero influence). But as the following AdAge chart of top ten topics from last week shows, people don’t talk about them. In fact, they talk about jokes and games of wit more than anything else. 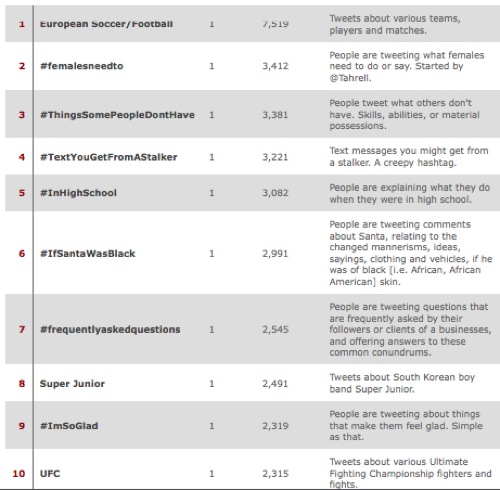 3) The digital divide is falling on Twitter, according to Pew’s research. The U.S. demographics on Twitter have the social network leaning towards Latin and black users. 18% of hispanic adults use Twitter, 13% of black adults use Twitter, and only 5% of white adults are on the information network. The Ad Age article notes that hashtags featuring games of wit (who’s snark is best) often start in the African American community.

This news (particularly points 2 and 3) is great! It’s refreshing to see tools used in the manner that reflects the preferences of communities that adapt it. While mass media celebrities and marketers broadcast on Twitter (point 1), they aren’t necessarily listened to… Instead, an entirely different social network is developing, one that doesn’t match the criteria of pop social media. Let the witty hashtag games continue!

It’s also encouraging to see that Twitter has become a leading information exchange for minorities. Ironically, the primary news about the Pew report dubbed the overall U.S. adult adoption rate at 8%, but didn’t focus on the leading communities. Perhaps there’s more to discuss about the digital divide, and how news is reported about it online. In either case, the news is encouraging with a primary social network leading the way towards equal access of information.