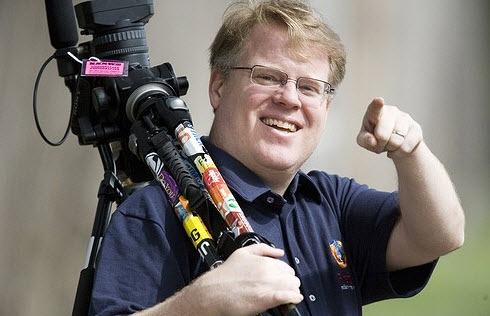 Following up from the joint blog post, “Why Tech Already Has Women…” co-authored with Danny Brown, noted tech blogger Robert Scoble felt the critical remarks in the post were unfair. After discussion and sharing our source material, he agreed to answer five questions and clarify his views. Thank you, Robert, for addressing this criticism directly, and for taking the time to answer these questions.

Q: Please state your opinion on these statistics: 40% of U.S. companies are started by women, but only 10% of VC backed companies are led by women. This is in spite of statistics that show: Women-run tech startups generate more revenue per invested capital and fail less then those led by men, according to New York Entrepreneur Week. “Companies, including information technology, with the highest percentages of women board directors outperformed those with the least by 66%,” according to research by Catalyst. Making matters worse, Silicon Valley seems to be contracting on minority and women leadership. Why is this happening?

Scoble: I focus on fact #3 in Why Men Get VC Money and Women Don’t... and the thing that I’ve noticed is that people who are technical get ahead in Silicon Valley (and in China or India or Israel, for that matter). The problem is that we’re graduating fewer women in Computer Science than ever before and THAT is the #1 problem we need to take on. And let’s not even talk about other traditional minorities. There the story is even worse.

There are a number of reasons for that, but #1 is happening in our engineering schools. If women continue to choose non-tech careers this problem will continue no matter how much we yell and scream about it.

The other things are definitely influences we need to pay attention to.

But let’s go back to 2001. I held an open-to-the-public dinner for bloggers. Nearly everyone in the industry showed up, but only two women did. This was an open-to-the-public dinner, not some private boys club. In that small room at Dana Street Coffee were also Biz Stone and Ev Williams, but also Mena Trott, co-founder of SixApart. Also Dave Winer. Brad Fitzpatrick. And lots of others who went onto great careers. This was the event that if you were there, you got access to people who went onto change the world. But mostly men were there. Can we change that? I don’t know how, especially when the numbers of women coming out of college just aren’t high enough.

Q: From remarks you made in the Facebook Group Tech Leaders and Influencers (Nov. 20 and 21) it’s clear that opportunities like O’Reilly conferences and your interview series are not interested in highlighting women unless they are CEOs of hot startups, currently . Yet you admittedly say, “What I do is the feeding system for conferences like the O’Reilly one” and in your words exactly, ‘I am not willing to overrepresent one group just to fix this problem.” How can women succeed in tech if the conferences, media and bloggers don’t give potential CEOs an opportunity to shine?

Scoble: I didn’t realize that succeeding in tech required conferences, media, or bloggers? Instagr.am, done by two guys, has been very successful and would have been successful without any of that. They didn’t announce their product on stage. I never knew about them before they showed me their product (and I didn’t write much about it the first few days, yeah they got into Techcrunch but they would have been successful anyway — many apps get successful without being in the blogs. GroupOn’s CEO said he even avoided blogs and conferences and he built a company with a value of billions in 18 months.)

So, I challenge your assertion. Conferences usually REWARD success. Look at SXSW. Does anyone get on stage BEFORE they build a world-changing company? No way.

My show? It’s a bit different. I’m looking for new companies that no one has heard of before. But that means talking to the founder or the CEO. Why? Because they are the ones responsible for the vision of the company and that’s what I want to talk about. I’m not a show about the janitorial staff. Or the marketing department. Or the accountants. I want to understand how the company is going to change the world. Only one person should speak about that on behalf of a company: the CEO and founders. Now, sometimes they bring others along to help explain their vision. A high tech company might bring along an engineer, for instance, to further explain the technology in a chip, or something else.

Q: If a woman is employed in a tech company, but is not a CEO or not a programmer does that make her any less a member of the industry or qualified to talk about the business of technology?

Scoble: Yes. The CEO or founder is the keeper of the vision and has the best view of the business. No one else does. It’s why I don’t speak for Rackspace very often. That’s the CEO’s job.

Q: When suggestions in the aforementioned Facebook thread were made about how you can help women in tech, you said, “To be honest, though, I am not that interested about the topic… I’d rather interview the few women that are running companies.” Totally understand this. As a blogger and entrepreneur, it’s hard to get told what to write or do. Given the time that has lapsed since the thread, have you decided to do anything in the immediate future above your current content direction to help women in tech?

Scoble: Yeah, since that thread happened I started a party series to help networking happen (it’s private and small, but 70 people showed up to the second one) and I’m doing that with two women and we’re working to keep the gender mix as equal as possible. Also, there are other groups I’m involved with who are bringing women and men together for better networking.

I’m looking for what I can do in education, too. I have two young sons and our education system sucks, even for boys, so this will be something I’ll spend more time on.

Q: What are your suggestions to better the glass ceiling in the technology sector?

Scoble: Promote better role models for women (I’m always looking for great CEOs. Look at Victoria Ransom, for instance. She’s doing great). By the way, we’ve had women CEOs at HP, eBay, and Yahoo, so I don’t think the problem is a glass ceiling. It’s more nasty than that. Many of the men in this industry treat women with disdain. Just look at the comments on some of the YouTube videos with women in them. Solving that problem is something above my pay grade, although I try to fight those attitudes when I see them.

By the way, one way I am helping is being open to all. I’m sharing a car ride down to CES with an influential woman in Silicon Valley (she runs a fabulous networking event here) and that happened because I put my phone number on my blog (it’s +1-425-205-1921 ) and my email is scobleizer@gmail.com — I’m looking for companies who are building world-changing technology and hope more and more of those in the future will be done by women.

Cited from Wikipedia: Robert Scoble (born January 18, 1965) is an American blogger, technical evangelist, and author. Scoble is best known for his blog, Scobleizer, which came to prominence during his tenure as a technology evangelist at Microsoft. He currently works for Rackspace and the Rackspace sponsored community site Building 43. He previously worked for Fast Company as a video blogger. He is also the co-author of Naked Conversations: How Blogs are Changing the Way Businesses Talk with Customers with Shel Israel.