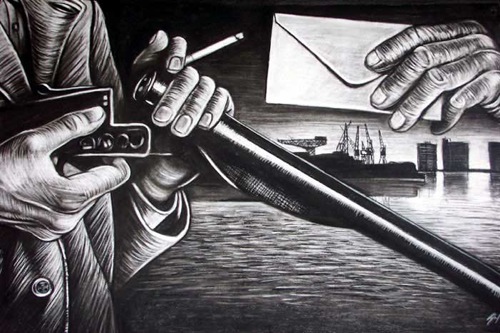 As we watch protestors risk their lives and demand governmental change in Egypt, a secondary news story has evolved. Pundits are actively debating the role (or lack thereof) that social media and the Internet played in sparking the Egyptian protests, Tunisia’s revolution, and Yemen’s unrest. There’s a whole camp of Malcolm Gladwell-esque voices who bitterly claim only revolutionaries make revolts, social media has no valuable role in the discussion. To deny the use of new tools as exciting and noteworthy in a revolution is a mistake. It’s the equivalent of shooting the messenger, the poor soul carrying information between warring parties.

At the same time, one can see how statements like “the same Web tools that so many Americans use to keep up with college pals and post passing thoughts have a more noble role as well, as a scourge of despotism,” would fuel such angst. Like the messenger, social media is just a communications tool set, and perhaps not even the most powerful one at play.

Consider Al Jazeera’s incredible role in covering the events to date, particularly given that the U.S.-based media was focused on domestic events until the past few days. Al Jazeera’s coverage has been outstanding. Just this morning Egypt shut down Al Jazeera‘s local offices. 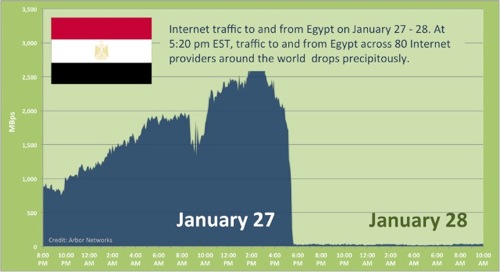 The best testimony about social media’s role in these events has to be the efforts of the Tunisian and Egyptian governments to thwart or completely cut off the Internet. As you can see from the above chart published on Mashable, the Internet became a critical communications point leading up to the events of the past few days. It’s no wonder that the autocratic Mubarek regime sought to protect its own power by cutting the Internet.

It should be noted that the protests have significantly escalated since the proverbial kill switch was hit on the Egyptian Internet. So at best social’s role can only be painted as a catalyst, and not the ultimate factor.

Perhaps the most sane analysis of the debate about social media’s role came from Jeremy Littau: “So of course social media caused the uprising in Egypt, and of course it didn’t. It truly is both and to try and pin it on one type of public is too simplistic. It’s never one thing.” Indeed, there are many, many factors at play in the Egyptian protest, most importantly the willingness of individuals to publicly stand against oppression. People complaining about stories debating social media’s role will likely remain frustrated. The ongoing conversation is an inevitable story, and rightly so. The fast, networked decentralized capability that social brings to revolutionaries and protesters is incredible. That sword cuts both ways, too. Autocrats can use social media to identify and monitor networks of dissidents!

Framing the argument around using online tools to better activities makes a ton of sense. The tools have evolved, but historically there have always been ways to spread the word in times of unease. Messengers and carrier pigeons were used before the telegraph and radio, which preceded television and email. All were used historically for revolutionary purposes to galvanize human networks, as well as to oppress whole countries and commit genocide. As you can see, it was not the tools, but the people who used them to deliver their messages. Yet watching this week’s conversation, if social media were a carrier pigeon it’s already been well roasted by its various masters.

Expect to see a lot more discussion on the role of social media in the Arab world’s 2011 uprisings. But know until either Twitter or Facebook releases statistical data (if ever) about in country use of the tools preceding and during the revolutionary events, it’s strictly conjecture.

We just know that in some ways, these tools have lent themselves to a higher purpose than talking about Kim Kardashian’s marketing on Twitter. And that’s a great thing. But it pales in comparison to freedom and change in an autocratic regime.

Lest we get too exited about the tools, let’s not forget that people have died. The people are the one’s shouldering the risk invoking this would-be change. So our prayers should go to those souls who are fighting the good fight in Egypt. May there be as little bloodshed as possible.

What do you think of the ongoing debate about social media’s role in the Egyptian, Tunisian and Yemenian uprisings?