Given the increased focus on “Twinfluence” thanks to measures like Klout, there are many organizations eager for success with so-called influencers (at least by Twitter metrics). Though some of these measures integrate more than just Twitter, they tend to be extremely 140 character centric. That may be a huge mistake for companies and nonprofits who overvalue the importance of Twitter in the larger social web context.

Let’s start with the fact that Twitter doesn’t even represent a strong minority of the U.S. population. According to Twitter’s last update in September, the network has 145 million members worldwide. Yet regardless of the number of accounts worldwide, active users are estimated to be significantly less. One study released a year ago pegged the active rate at 21%. Can you imagine literally reducing Twitter follower counts by 79% to get the accurate number? 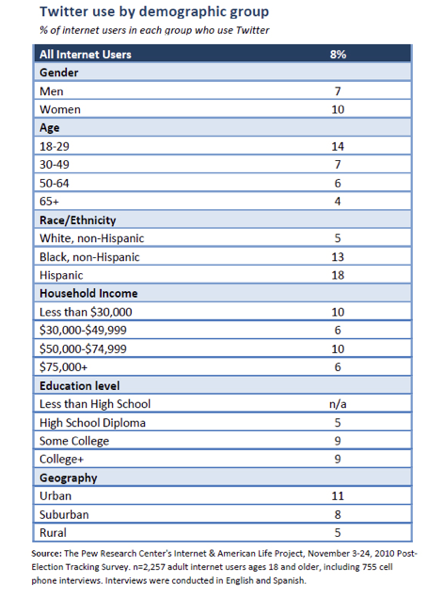 Want more statistics? Pew Internet pegged Twitter usage at 8% of the American population. The numbers get worse, according to Pew. Only 6% of American households grossing more than $75,000 use Twitter. Additional analysis reveals that 48% of all active account users check other users’ updates every few weeks at best. Half of your followers are not listening!

This should tell a communicator that only 3.5% to 4% of Americans are actually using Twitter AND are actively reading their update streams. It sure seems like marketers are spending a lot of investment on influencer programs for a relatively small percentage of the population.

So why all the hype still? Unlike Facebook, Twitter is public and searchable (see Google Social Search story). And that makes Twitter imminently more friendly to two key stakeholder communities; marketers and content publishers, such as the media. Given what marketers and media companies do professionally, everyone hears a lot of noise about Twitter, but that awareness has not converted to actual usage (thus Edison’s very revealing statistics).

In 2009, the New York Times has attributed 10% of its web site traffic to Twitter. But according to Pew that gives the New York Times access to three audiences; young adults, minority internet users, and of course, urbanites. At that, consider that these are still small percentage of these demographics. What about the other 96% of the country?

One can have a lot of success with Twitter. But it is not the primary social network, and one with a lot of inactive accounts and relatively limited portion of the population. Proceed with caution if your market needs to reach more than this limited group of communities.

More importantly, make sure you know who your communities are, and where they like to talk. Don’t over value Twinfluence. Given that 92-93% of Internet using Americans don’t actively use Twitter, consider looking elsewhere an essential part of your research.

What do you think? Is Twitter overvalued as a medium?