Galvanizing Your Organization to Help in a Disaster

There are times when a cause campaign is not about mutual reward for brand and beneficiary, rather responsible citizenship. Disasters are such times. There’s no greater example of this than the current triple crisis of earthquake, tsunami and nuclear disaster in Japan. Using online tools, it’s easy to participate in charitable activities, and help situations like the Japanese crisis.

When your cause or company’s employees and stakeholders want to act and participate on the frontlines of the relief effort, there are several things you can do. Whether it’s leveraging your online community, offering financial resources or volunteering, almost every person and organization has assets to offer.

Before going too far, please ensure that the organization is motivated by a clear desire to resolve or provide relief to a devastating event. If your goal is to market or strengthen the social responsibility factor of your brand, the disaster campaign could easily achieve the opposite and tarnish your brand with an opportunistic hue (consider Spirit Airlines oil spill faux paux). Disasters are a time for social responsibility and altruism.

When the Deep Horizon oil spill occurred and companies began stepping up their response, Dawn dish soap stood out. Dawn soap products were donated as a means to clean birds, and the effort was well received publicly. The company simply publicized it was donating the products. Further Dawn’s bird cleaning ads can be considered in good taste because they had been deployed prior to the oil spill accident. In fact, because life matched brand promise, the ads were strengthened.

Spur of the Moment 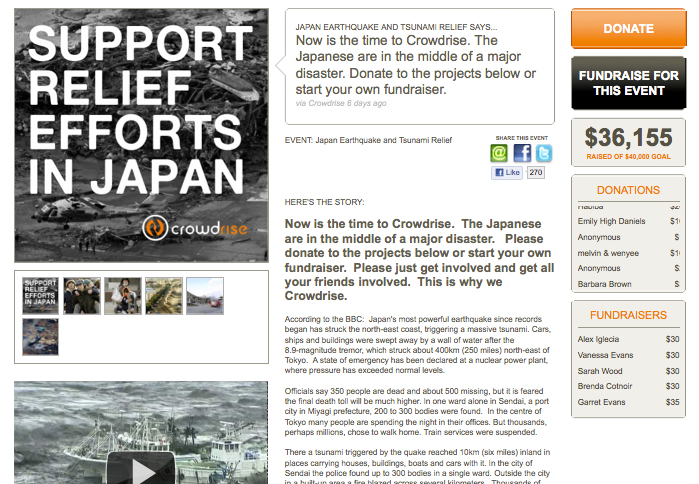 If an event happens such as the Japanese earthquake that’s so compelling it inspires you to act, the best thing to do is to affiliate with an entity that is well prepared. For example, the America Red Cross literally exists for crisis situations and its business is preparedness. If you prefer a less organized effort, consider Crisis Commons and the fantastic job they do getting coders and other techies to help out in crisis like the Sendai earthquake.

The point is that there are dozens, even hundreds of causes and organizations that prepare for such events. Rather than reinventing the wheel on the fly, find and support them in the ways that they suggest.

Many of the more experienced players have grassroots systems for you to participate in and fundraise. Further, independent fundraising platforms like Crowdrise, Razoo, Causes and Jumo allow you to set up your own social fundraising campaign autonomous of a charity’s oversight.

One of the most powerful testimonial effects of the #SxSWCares effort last weekend was its use of grassroots word of mouth power to support Japan. But it did so as an independent fundraiser for the American Red Cross. Similarly, when Google founder Eric Schmidt wanted to donate $100,000 in matching funds to Japan, he sought experienced nonprofit Citizen Effect. Lady Gaga also decided to support the Schmidt/Citizen Effect effort. 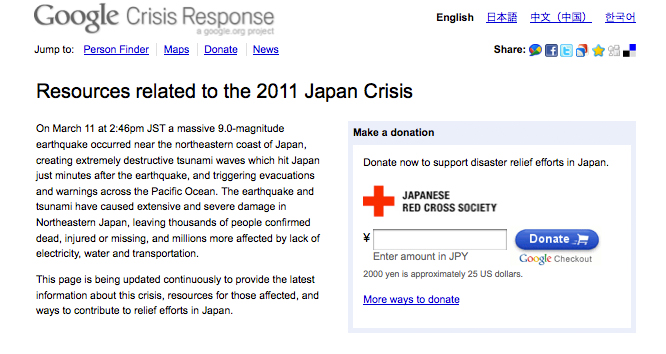 One of the best things a communicator can do is create a crisis communications plan for missteps and disasters. Similarly, preparation to help in advance of disaster situations makes sense. This allows the organization to literally pull a book off the shelf and follow directions or adapt them to unique situations. Network for Good was able to send attendees to SxSW AND prepare its network for recovery efforts thanks to prior planning for crisis events. As of last evening, Network for Good had raised $4.3 million for its group of earthquake causes.

With a pre-determined crisis plan, you can deploy resources in a manner that better plays to your strengths. Further, the nonprofit or company can save funds and allocate other resources for that unfortunate day in advance, ensuring impact.

For example, Google has a crisis preparedness team for disasters. The team has been actively engaged in the Japan crisis since the earthquake, using tools like Person Finder, Checkout for direct donations the Japanese Red Cross, maps via Google Earth, and news aggregation. Google’s impact is significant and helpful, using its tools and networks to ease the situation as best as it can.

The questions you have to ask is how the organization can best assist in a time of need and how much is it willing to give. From there building a plan becomes easier.

Many organizations and people feel like they can do more than the current authorities and causes involved. Or they feel inspired to use tools in an unthought of way. Whether it’s an independent fundraiser or a new tool, this is the heart of innovation. If innovation can possibly make a difference it only makes sense to engage.